The chocolate blackout cake is not just another chocolate cake, but the enfant gâté of cakes. Noble in appearance, its name − as heavy as history − foreshadows what is going to happen to you when you bring it in contact with your demanding palate. A blackout! It’s impossibility for chocolate lovers not to know it, and if some have not had the honour to try it yet, we will take care of that. Blackout cake of the three “hellish” layers, coated with cake crumbs as a last “touch,” can satisfy the most demanding of chocolate-lovers.

The cake comes from Brooklyn, and the credit goes to the bakery – no longer in existence − that belonged to German immigrants, George and Catherine Ebinger. The company was first founded in 1898 and soon more than 50 branches blossomed in the neighbourhoods of New York, to shape many generations (there, in the streets of New York we also encountered the flourishing of the donuts). The chocolate Blackout cake was the Ebingers’ “pride”, along with other cakes, biscuits and tarts. 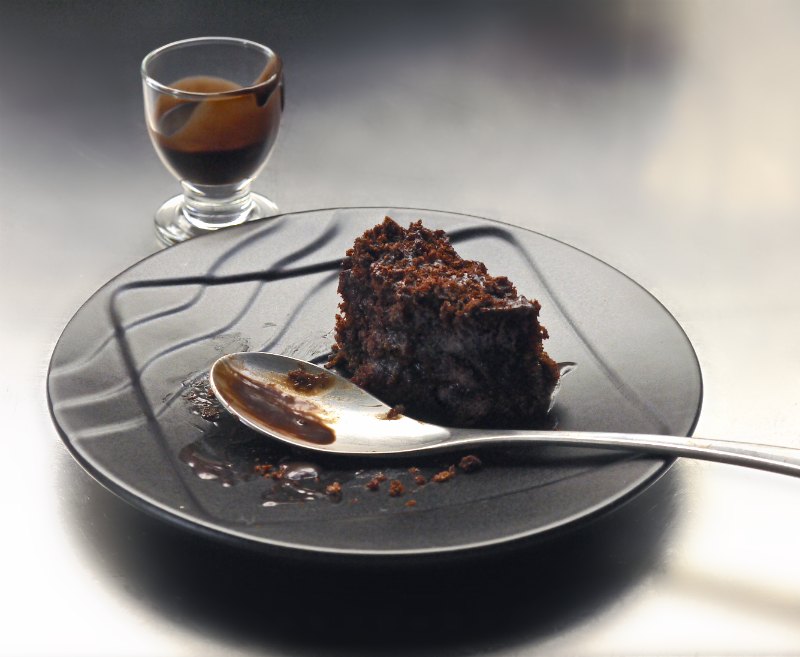 Godfather of the chocolate blackout cake was a heinous and inhuman situation, and one which does not bring sweetness to our minds, whose name was WWII. The beloved bakery was situated opposite Brooklyn’s shipyard, from which American warships were departing to war – thus right in the heart of the events.

During the war the Civilian Defense Corps instituted black-outs, so that ships sailing off to battle could not be spotted by enemy planes (a frequent occurrence during the war). City lights were turned off and civilians covered windows with black cloth. Given these black-outs, that often plunged the city into total darkness, the equally dark cake was thus baptised. 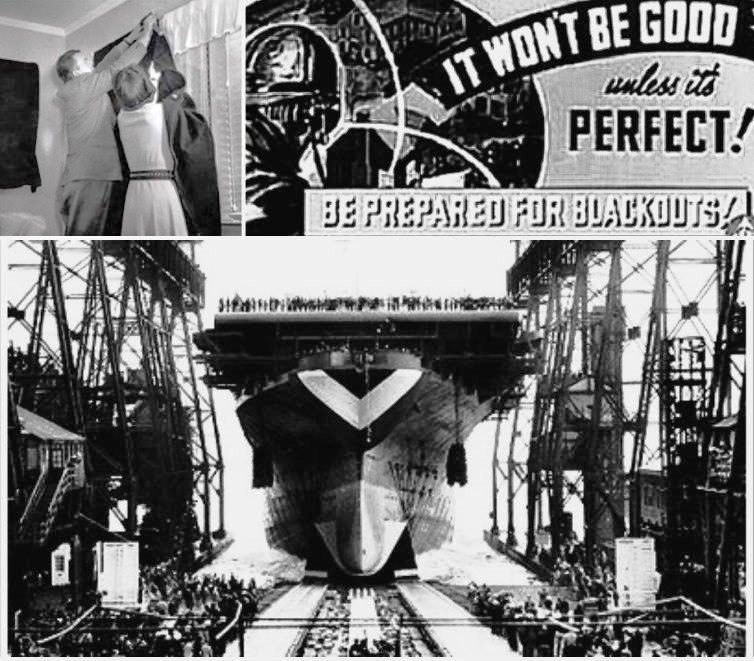 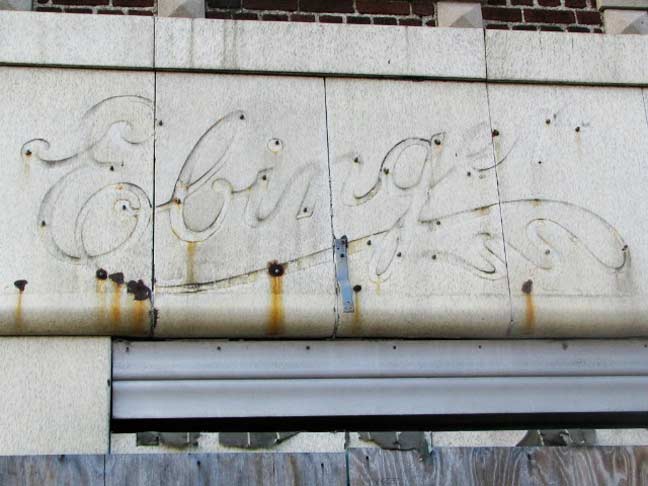 During its first decades, the reputation of the chocolate blackout cake and demand for it were rose rapidly, while many bakers tried to imitate its unique taste − though in vain. The exact recipe of the Ebingers is still unknown. In 1972, the bakery went bankrupt, and the status of the favourite cake began to fade. House freezers hosted as many as they could accommodate and soon blackout chocolate cake became an antique cake in the eyes of the young, who had heard of its divine flavour from their grandparents, among other historical narratives.

Of the many recipes which succeeded the original, some have approached the authentic taste, while others have failed miserably, sometimes because of the ingredients, and often because of excessive sweetness. We introduce and recommend to you the version of the chocolate blackout cake that we created after many many tests. When served, it indeed causes a certain “blackout”! If you are a loyal fan of vanilla or other sweet flavours we have created an emergency exit for you! 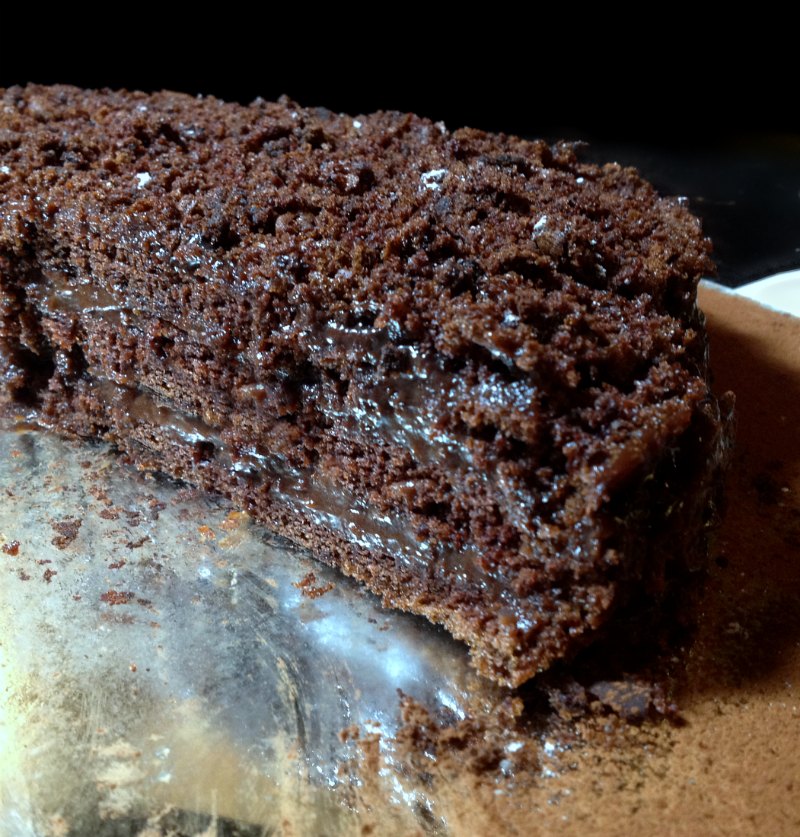 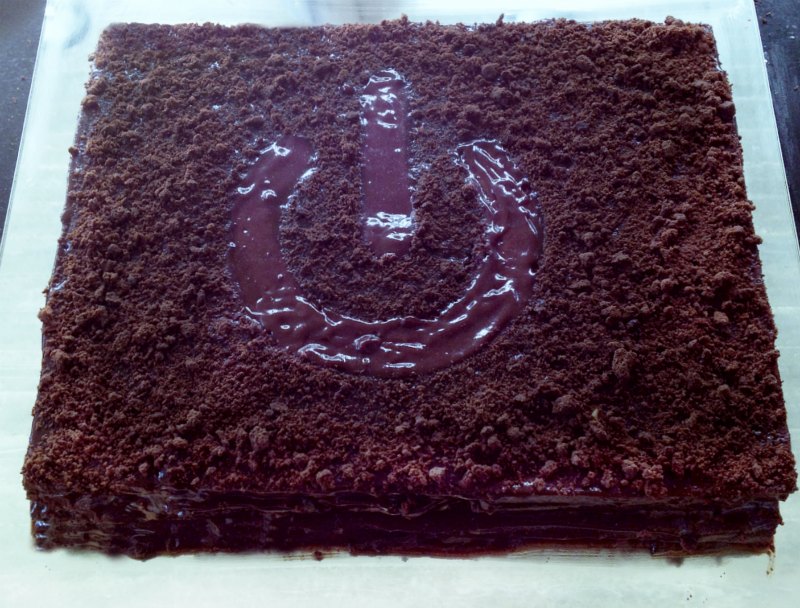 The chocolate blackout cake is suitable as a birthday cake, or for situations in which you choose to impress with one main ingredient, instead of using glaze bows and inflatable colours. Its dark top is made of crumbled chocolate sponge “glued” with chocolate custard, so you can easily create a relief for visual effect by cutting a paper in any shape you want (use standard A4 copy paper), covering the part of the custard you want to remain as an ornament when spreading the crumbs. Remove the paper and you will have on top of the cake a dazzling, yet classy, “ton sur ton” design (see picture).

Blackout sponge cake is also beautiful when made square, though the original American version of the Ebinger bakery had a tall, tower-like shape, one which is not to our taste. The majority of the Anglo-Saxon recipes give instructions for building the characteristic towers of 18-20 cm in diameter, with a height larger than the base. If you prefer that design, we recommend your using a 20 cm springform tin (the one in the picture is 25cm). You can make a square chocolate blackout cake measuring 32 x 25 cm by increasing the ingredients by half. 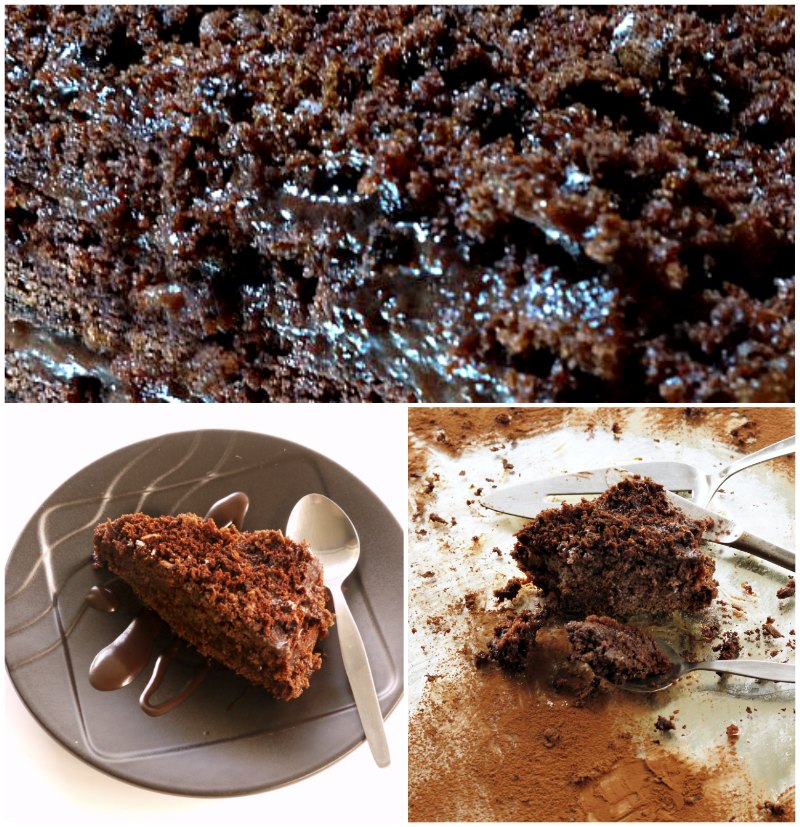 Although the recipe results in the absolute chocolate taste and is extremely addictive, its sweetness is not cloying. If you are a fan of super-sweet cakes, you may increase the sugar of the custard up to 400 gr (not more). In that case, increase proportionally the cocoa powder and the cornflour (not the water).

The authentic American version for the chocolate blackout cake has golden syrup instead of honey. However, this substitution of ingredients does not affect the final result. Finally, a serving platter in line with the idea of “blackout”, or a neutral dish, will highlight the cake and the sensation it creates.

A devilish recipe that everybody likes, even those who are not chocolate fans. As for the chocolate lovers, they will definitely fixate on the cake!

Preparation: About 1 hour plus time to chill. It is recommended to prepare the dessert the day before and to refrigerate the chocolate custard overnight. Assemble on the day and preserve the cake in the refrigerator until served. Use a springform tin 20-25 cm diameter (up to 26 cm the most) or 3 equal in size flan tins. Medium difficulty recipe but easier than what it looks. Not quick. Follow carefully the steps. 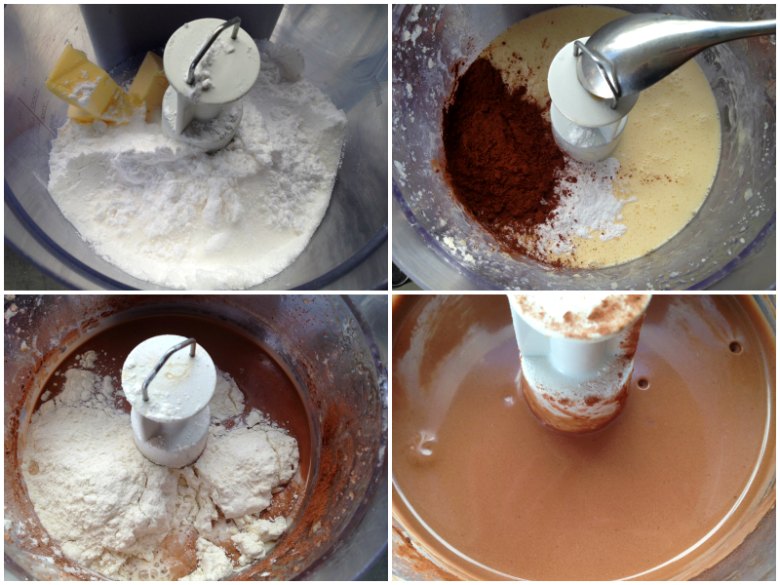 To prepare the chocolate base: Using a mixer or hand mixer, cream the butter and sugar until pale and fluffy (4-5 minutes). Beat in the eggs, one at a time, until fully incorporated. Lower speed at minimum and beat in cocoa powder, vanilla extract, baking powder, baking soda, salt and half the flour. From this point is recommended to use a whisk or spatula and mix by hand. Whisk in or beat in the remaining flour. Continue whisking or beating in low speed until there are no lumps of flour. Pour in milk (in low speed, if using an electric mixer) until all ingredients are well incorporated (do not over mix).

Alternatively: On the above process add only the egg yolks and beat the egg whites to firm peaks. Fold egg whites in the flour mixture, working quickly, but do not over mix.

Pour the cake mixture into the prepared springform tin or divide it between the 3 prepared flan tins and bake in the preheated oven for 25-30 minutes (or until a toothpick or fine skewer inserted into the center of the cake comes out clean). Remove the cake and allow to cool in the springform or tins, then turn out gently onto a wire rack to cool completely.

Note: You can use metal flan rings, round or square, that rest over an aluminum foil, without buttering. Aluminum foil is more flexible and easy to use than baking sheet and when inverted, cakes are removed easier. 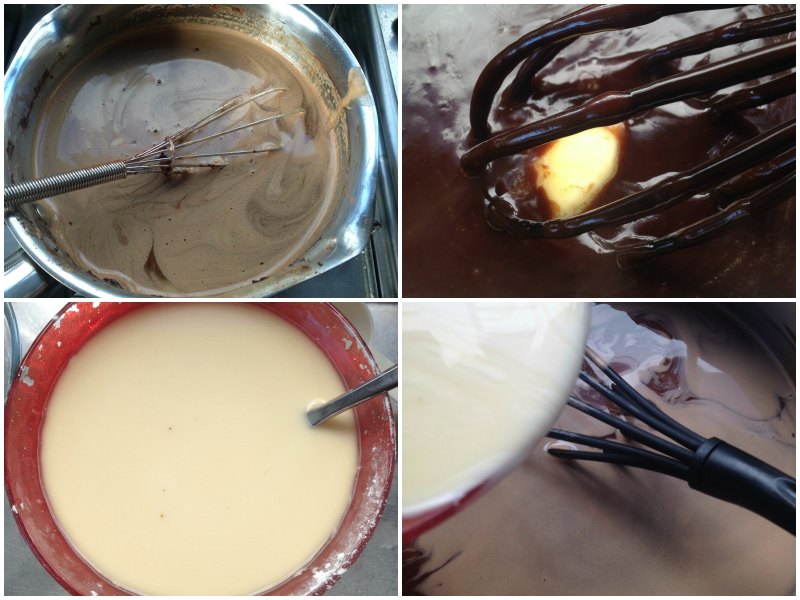 To prepare the chocolate custard: Pour water, sugar, honey or golden syrup and cocoa powder in a large pan over medium heat and bring the mixture into boiling temperature, whisking several times.
In a separate bowl, mix cornflour with 150 ml water to a thick mixture (like diluted white wood glue). If too thick, add 30-50 ml water. Pour into the cocoa mixture and stir for a few minutes over medium heat until it will reach boiling temperature again and completely thicken. Remove from the heat and add butter and vanilla extract and mix to incorporate. 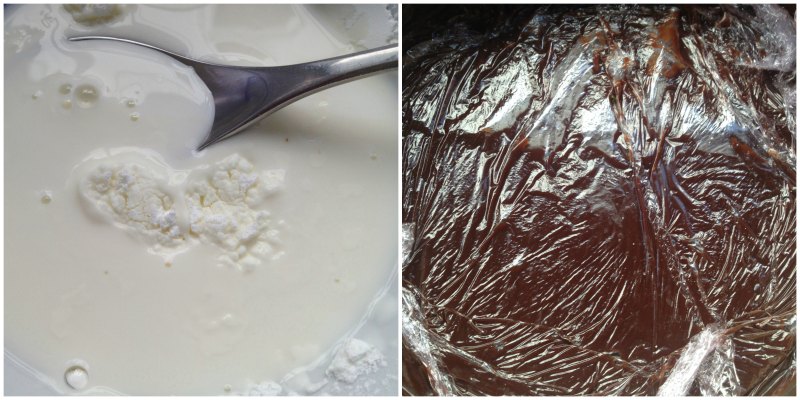 Pour chocolate custard in a bowl, cover with cling film pressing it onto to the surface (to avoid forming a crust), allow to cool and refrigerate for at least 3-4 hours (when required it must be cold and thicker). 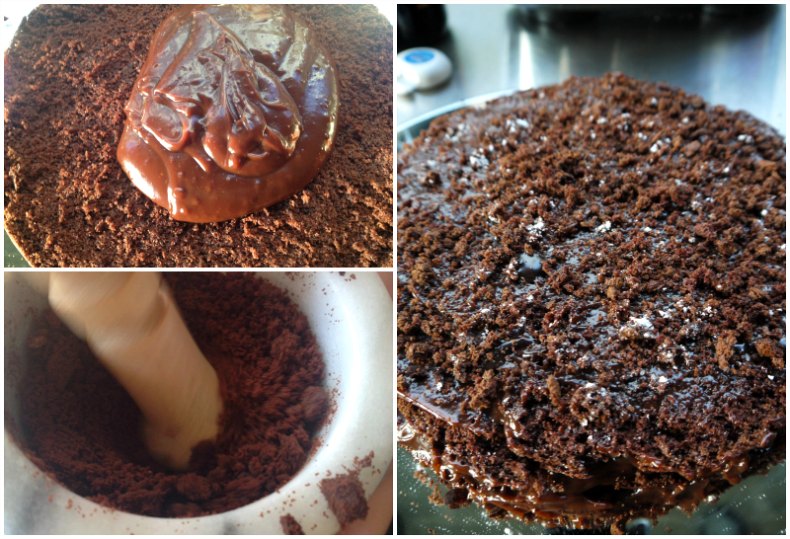 To assemble the chocolate cake: Gather crumbs from the bottom and walls of the springform tin and cut a very thin layer (2-3 mm) from the cake. Crumble with a mortar or mixer.
Place cake on a board and slice in three equal pieces horizontally.
If using 3 round flans, turn out one of the cakes. If using square tins, slice the cake pieces with sharp knife or dental floss in three equal pieces horizontally. 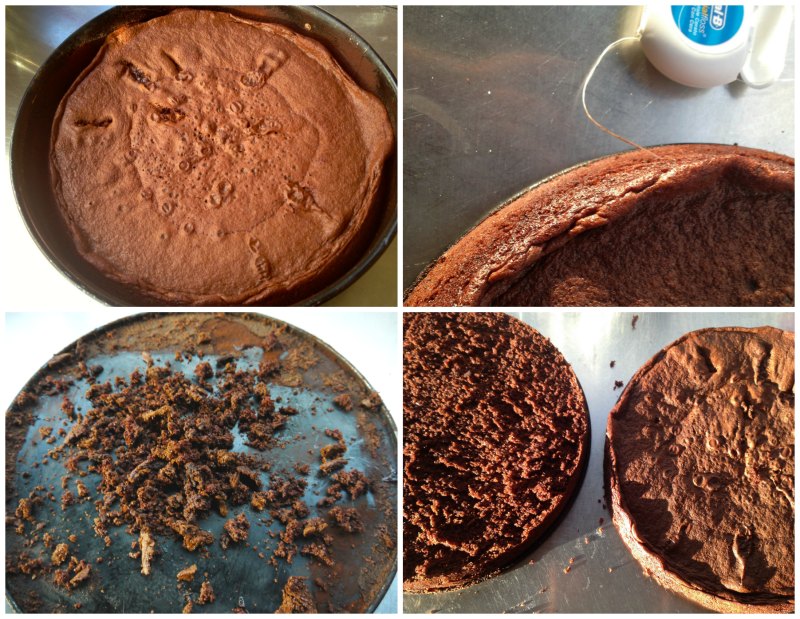 Note: Βefore crumbling, bake cake pieces in the oven at 100oC for 10 minutes to dry them out so that they won’t stick to each other.

Note on how to layer the custard: The two bottom cakes are spread with more custard than the top cake (the last one). The last custard layer is topped mainly with chocolate crumbs. 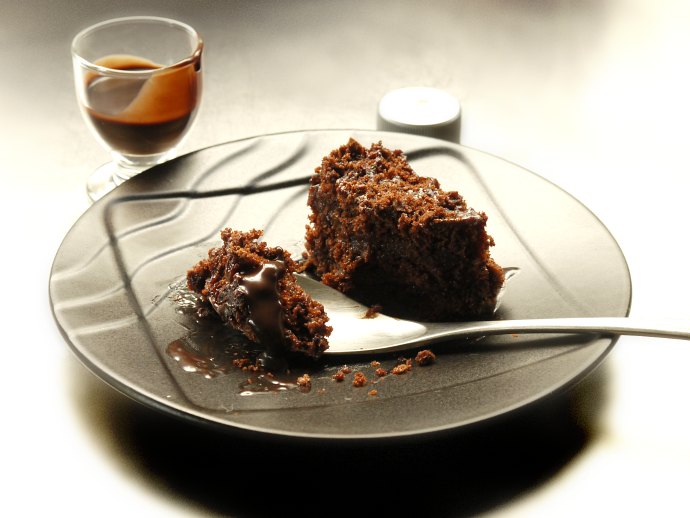 To serve: Serve the blackout chocolate cake cold from the fridge. If the serving dish is not black, dust it with cocoa powder to turn the dish absolutely dark. For an extra chocolate touch we discovered a wonderful choco liquer, Plaisir Noir, to drizzle over the cake pieces or to serve in a shot glass to accompany the dessert. 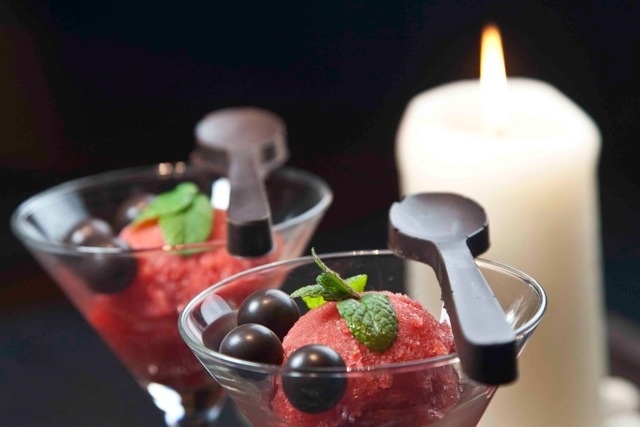 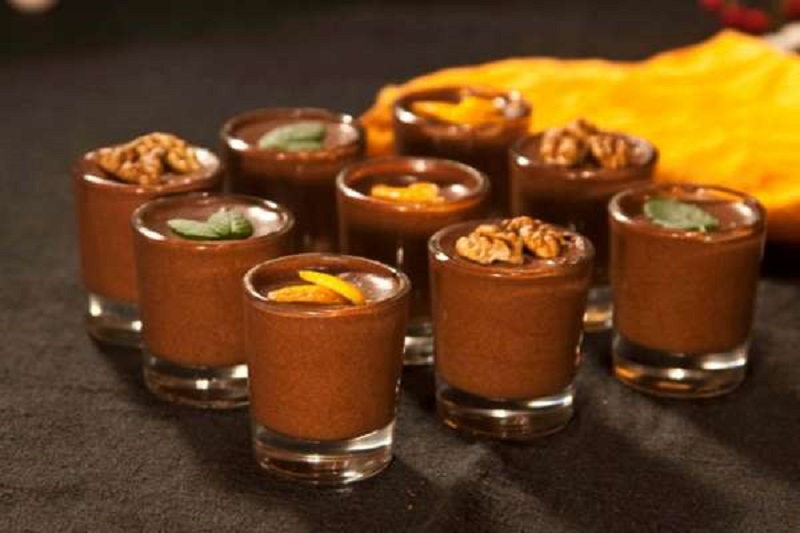