Pork shank is considered to be the lower (from its body position point of view) part of the animal, which has enough edible meat, before we reach the last part of the foot, the hock with the hoof, where the pig steps. In terms of cooking topography it is located at the end of the thighs, a cut that can be detected from the well-built rear legs of the animal to the chubby bottom, where the famous ham belongs.

Depending on the country, it is possible that the shank cut comes only from the rear legs, so each pig gives two shanks or even from the front legs -called as hock. The pig’s’ foot (see photo) is cut in three parts and the shank is anatomically located above the knee, regardless of the length of the bone that accompanies it. The remaining part downwards (lower leg) is disproportionately thin with little meat and a lot of jelly; it is mainly concerns what we call in cooking as “little ‘legs” and it is treated in a completely different way usually to make a sort of tripe soup, stock and jelly. Comparing to them, double cooked pork shank is far more than a double premium dish.

The more valuable (and more expensive) upper thigh (ham and shoulder cuts, back and front respectively) is a tender muscle tissue with its own internal fat. In contrast, the shank contains many connective tissues between the muscle endings. That makes it comparatively a harder meat and for that it is usually slow-cooked for longer time. Pork shank is also surrounded by its fat, which during the cooking process becomes golden-brown or darkens because of the caramelising (depending on the recipe); internally, the meat itself has less fat than the juicy thigh. Consequently, we’d say that nutritionally -and always comparatively- pork shank is healthier. You can find more about different pork cuts here and here.

Pork shank doesn’t belong in what we call “the premium cuts” of an animal, however all worldwide kitchens, the top ones included, appreciated it a lot – perhaps because they were developed in difficult times (reminds you of today, maybe?). So, the shank can be cooked in every way (from a pan to bbq) and everything can be used as side dishes, too (from noodles to potato mash). Among the most popular recipes can be found the beer shank (i will save that for another time), given that marinades (in wine, whiskey, beer etc.) make it more tender and the tasty sauces as a result of the slow cooking, highlight the matching dishes. 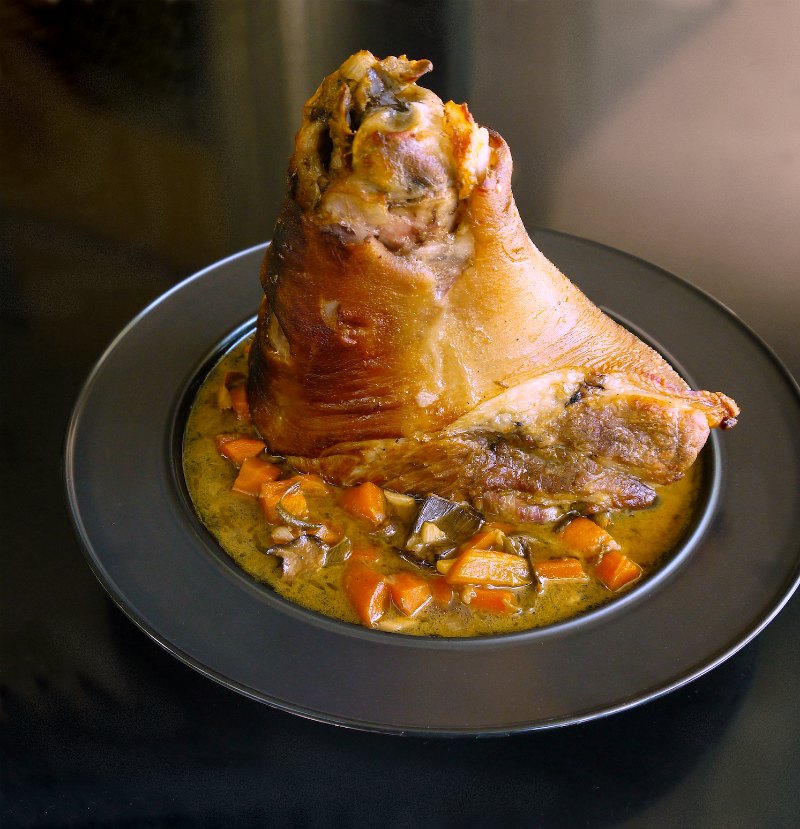 This particular recipe for double cooked pork shank literally double cooks the shank with wine and herbs, first in a pan/saucepan and then in the oven, following the concept of more time in lower temperature. It doesn’t include any marinade, thus it doesn’t require any special preparation. The pork shank is slow cooked and softens, its skin becomes crispy and the meat comes out tender and juicy. The vegetables in combination with the porcini mushrooms give us a tasty sauce for side diving our bread. In our table, it was accompanied with al dente noodles mixed with the pork sauce as the finalising touch.

Preparation: 10 minutes, 2 hours and 45 minutes for the total cooking time. Prepare the additional side dishes while the pork shank is being cooked. You will need a big, deep pan or a large saucepan with a lid that fits the shank. If you have any pans with rack that leaves some space between the shank and the broth while roasting in the oven, use it -Recommended. Just remember to wet the shank with its juices 2-3 times during the baking. Easy recipe, not quick.

To prepare the shank: Remove any hair (if it isn’t shaved against the grain), wash and dry it. Allow it to reach room temperature and put salt and pepper.
Preheat the oven at 160 C. 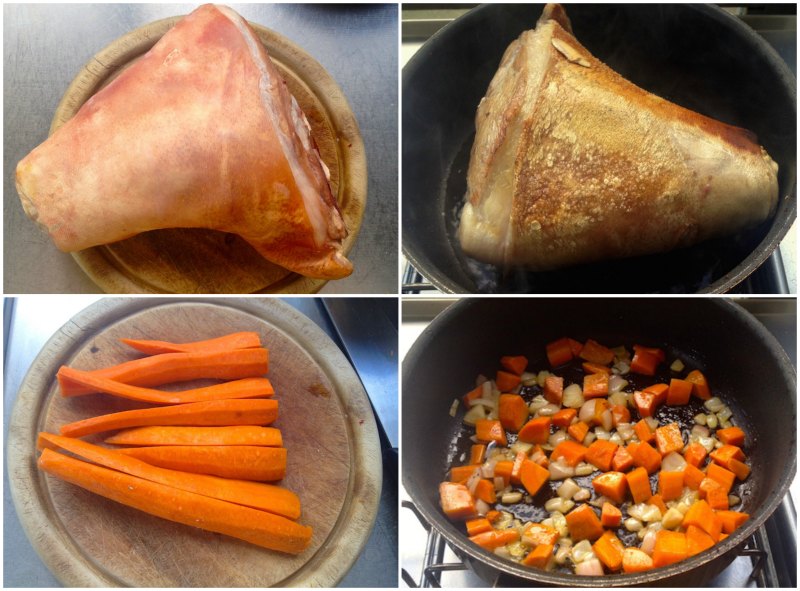 First cooking – to braise the pork shank: In a large, deep pan (medium to high temperature) heat the olive oil and saute all sides of the shank (12-15 minutes in total). Remove to a plate.
Put onion and carrot in the pan and cook for 2 minutes (medium temperature) stirring. Put the warm shank again in the pan, add the wine and allow half of it to evaporate.
Pour stock, add sage and lavender. Cover and cook in medium to low heat 15 min. per side. Try the sauce and adjust seasoning, if needed. 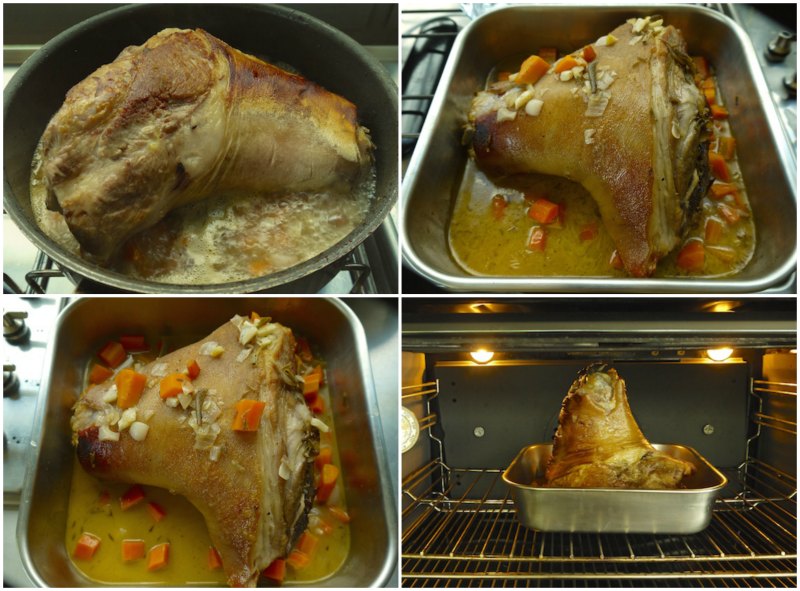 Second cooking – to roast in the oven: Transfer the pork shank in a small pan (horizontal position) and cover it with silver foil. Cook at 160 C for 1 hour. Turn on the other side, pour it with its fluids and add the porcini mushrooms in the broth. Cook for another ½ hour.
Increase the oven temperature to 230 C, turn the shank vertically and leave it uncovered to brown for 15-20 minutes (max.). Remove from the oven and keep it warm by covering it, loosely with some silver foil, upright as it is.

To serve: Use a warm platter and dishes (warm, depending on the season). Cut the double cooked pork shank vertically with a sharp knife and keep a part of the skin, if you like it, otherwise remove it. Next to the vegetable sauce, a big portion of noodles with 1/2 – ⅓ tbsps of sauce in their tips, will complete the dish.