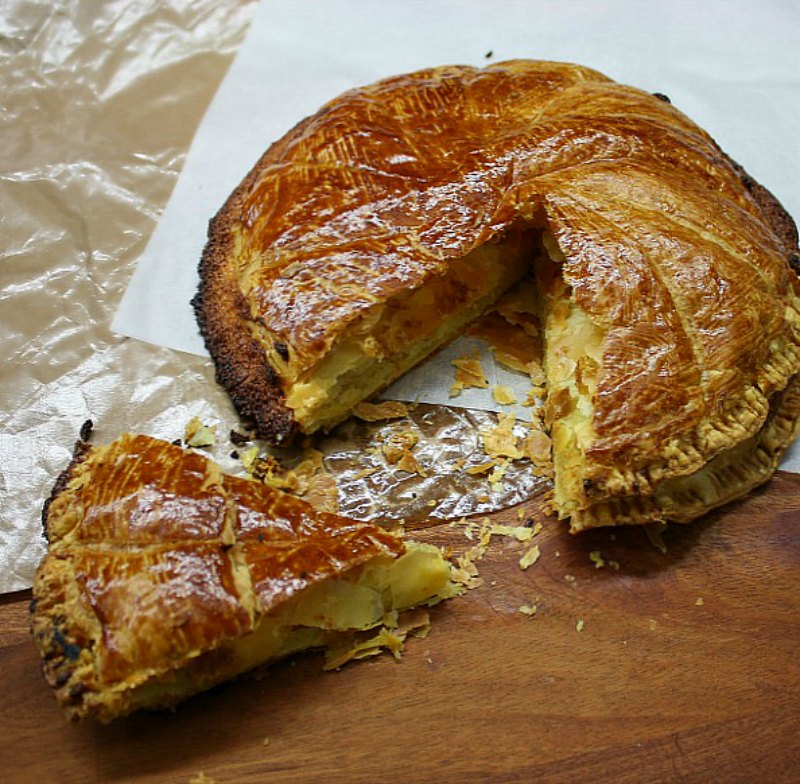 Greek tradition wants each family to gather around the table and cut a New Year’s cake, called “Vassilopita”. Inside it a hidden coin is supposed to bring good luck to the person who finds it. French people have their own similar tradition, with the only difference being that they have given their cake the name “King’s pie” or in French “Gateau de Rois” and that they cut it not on New Year’s Eve but on Epiphany day!

This French royal delicacy is made by two puff pastry sheets, graciously filled by a sweet almond cream… It may as well remind you of a regular almond pie. 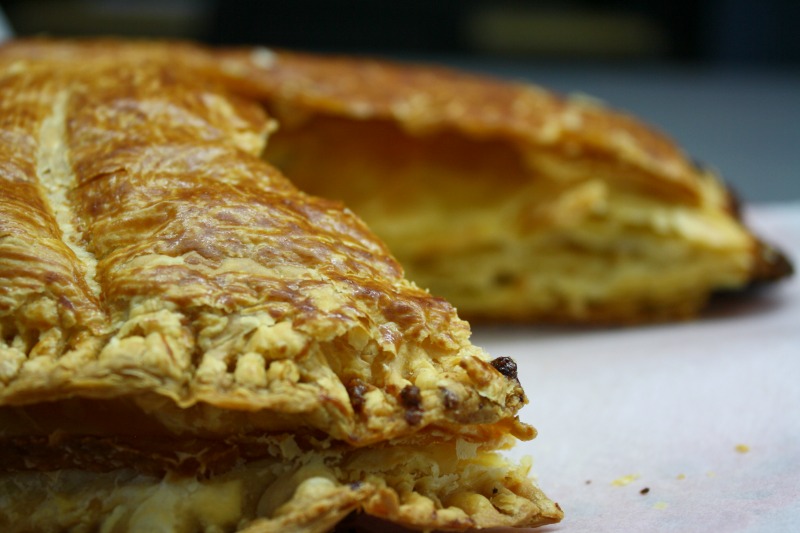 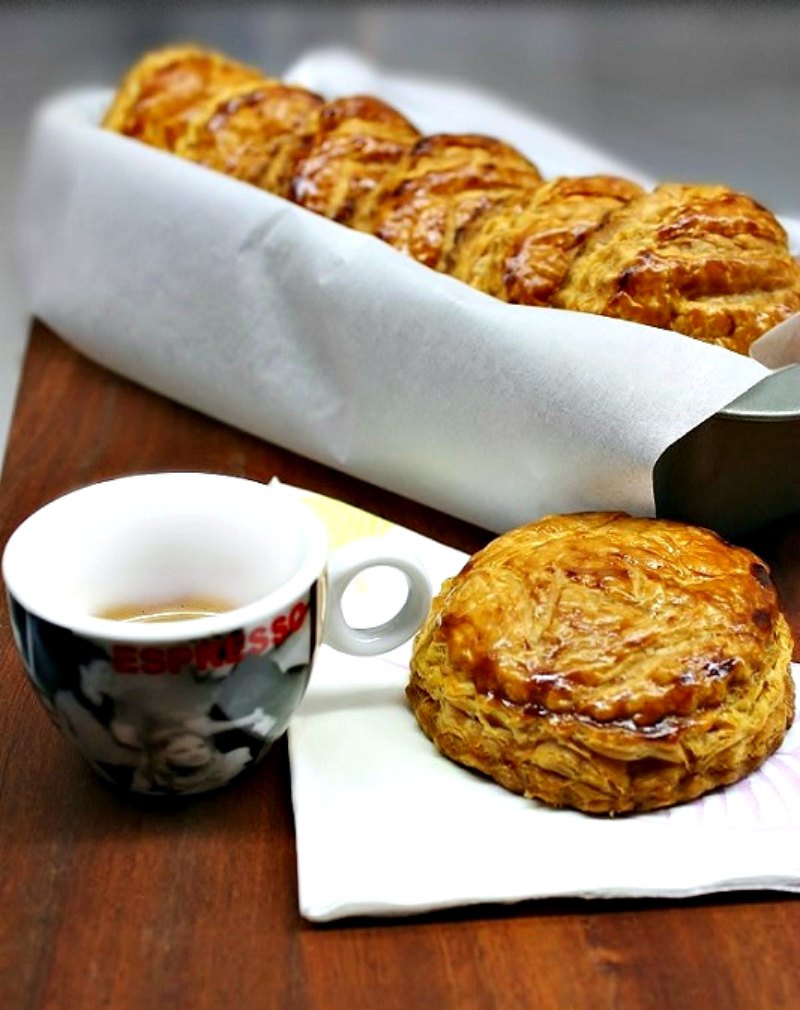 This traditional pie wouldn’t be so special if it didn’t carry its very unique history, preserved for many years. Having its roots back in the Roman Years, it was served during the celebrations of “Satournalia”, a feast dedicated to the God Saturn, as the name reveals. That day, the slaves were considered to be equals to their kings and were allowed to enjoy the flowing wine, the gambling games even the carnal pleasures. The custom asked for a bean to be put in the pie and the lucky servant to find it would become a king for a day whose wishes would come true. In order for the share to be completely random and fair, they used to put a child under the table, and he was the one to suggest which piece belonged to each person. 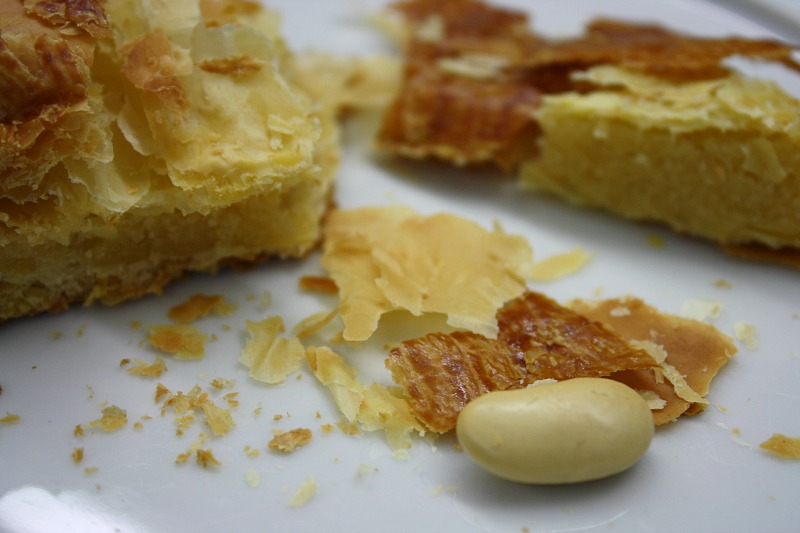 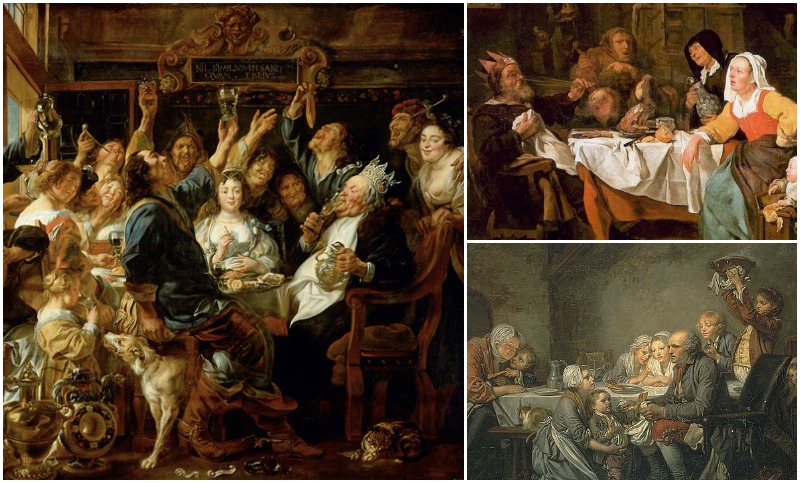 As the time went by, the tradition experienced an inevitable modernization. The bean was replaced by a small porcelain or a plastic figurine of baby Jesus and other figures. In the recent years, this figure may take the form of popular cartoon heroes as well. The winner who finds it, is “the king” or “the queen” and is entitled to have his/her wishes fulfilled.

In France, Galette des Rois is consumed until February and if you take a stroll in the streets and look at the patisserie’s window shops, you will find several different versions of it. It could be a chocolate or a fruity one, pretty much everything to satisfy your taste. However, the recipe is extremely easy and there is no need to buy one when you can enjoy a homemade. We made the classic King’s pie one, with the traditional bean, of course, secretly placed inside it. 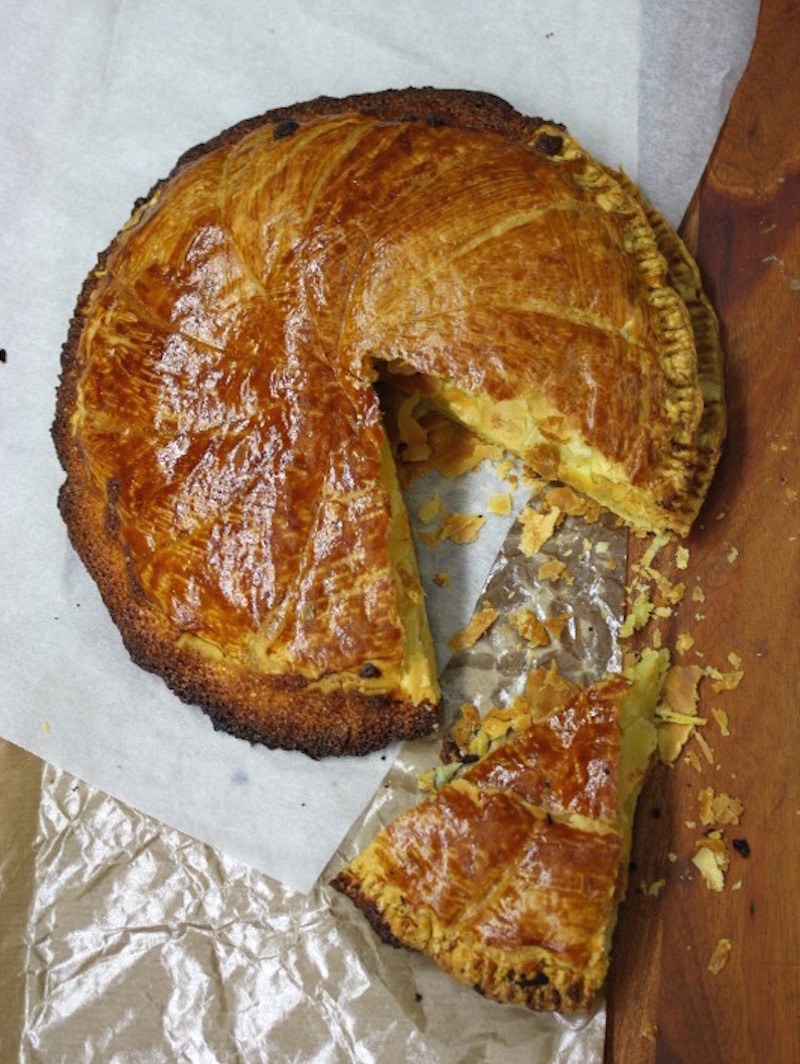 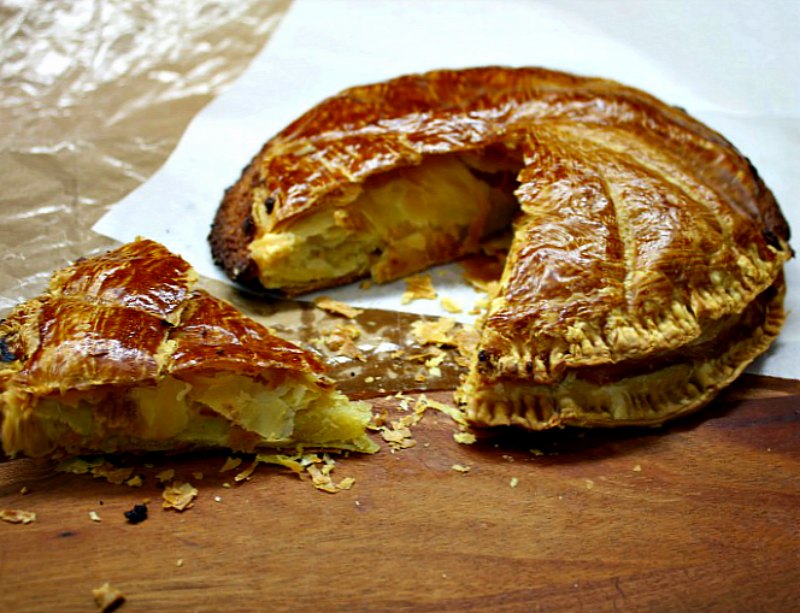 The first bite is challenging, but the second one is sweet and gentle. Almond tastes like perfection, in such way that you will consider of serving this one to your guests next year instead of the usual pie or the vassilopita. Worry not! There is no need for you to wait for another year to have a piece (or two). You can start making one now. After all, “Repetition is the mother of all learning”!

Preheat the oven at 180-190C.
To prepare the puff: Unfold the two puff pastry sheets and cut two circles of 30cm & 31cm diameter respectively using a round plate. Put them in the fridge while you prepare the rest.
To make the King’s Pie: In a bowl mix (using a spatula) the butter with the sugar until well blended. Then, add the two beaten eggs and stir until you have a homogenized mix.
Smash the white almonds in the blender until they look like powder. Pour the cognac (or the amaretto), the almond drops (if used) and the grated almond. Stir again. 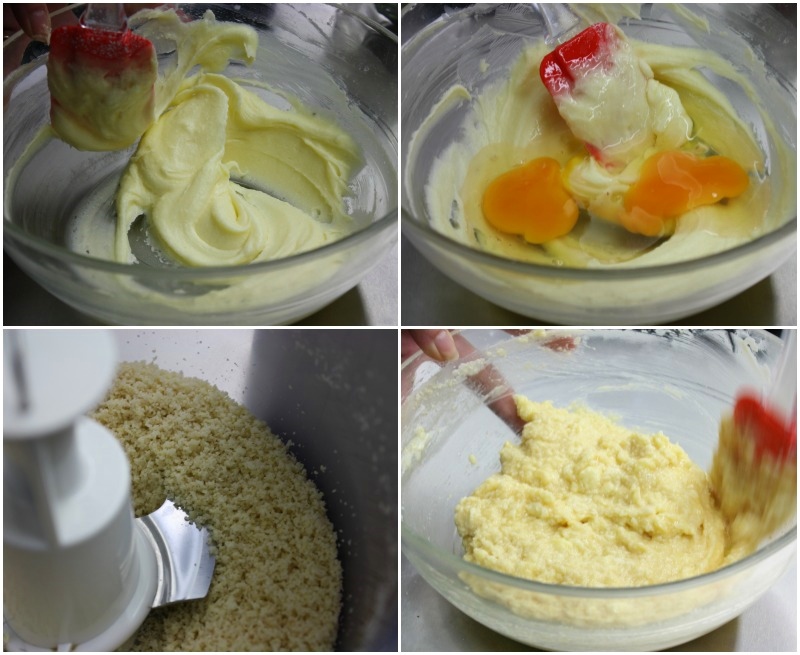 Put some greaseproof paper into a shallow baking pan and place the smallest puff circle. Pour the mix in the centre allowing a space of approximately 2cm around it. Brush this surface (2 cm around mixture) with the egg yolk diluted it in a tablespoon of water.
Place the two beans or the porcelain figures in different spots and cover with the bigger puff sheet. Use your fingers or a fork to join the ends of the sheets, where they meet. 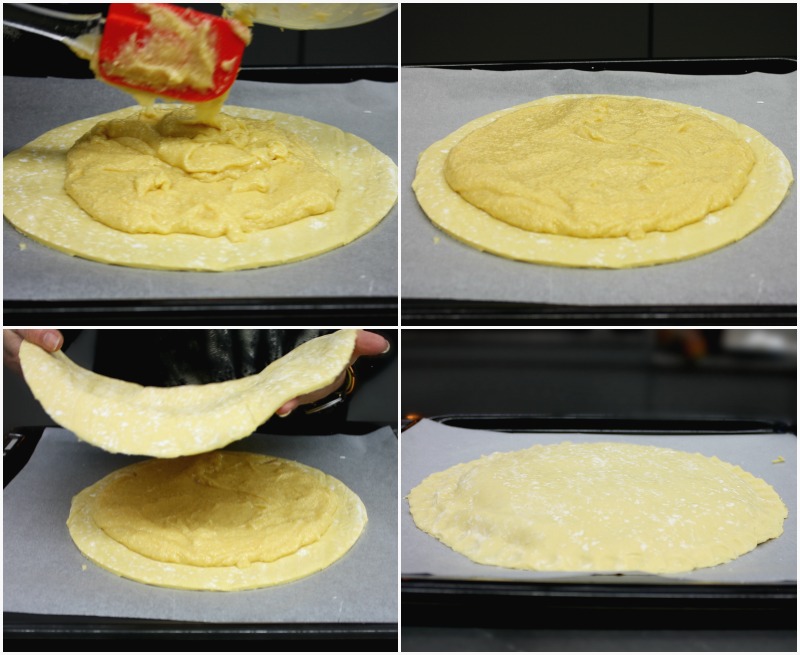 With the tip οf a small knife score lines or any other design of your preference at the top of the dough and brush with the rest of the egg yolk. Bake the Gallette des Rois/Kings pie in a preheated oven for 40 minutes in the middle rack, then put the pan lower in the oven base and bake for 10 minutes more. 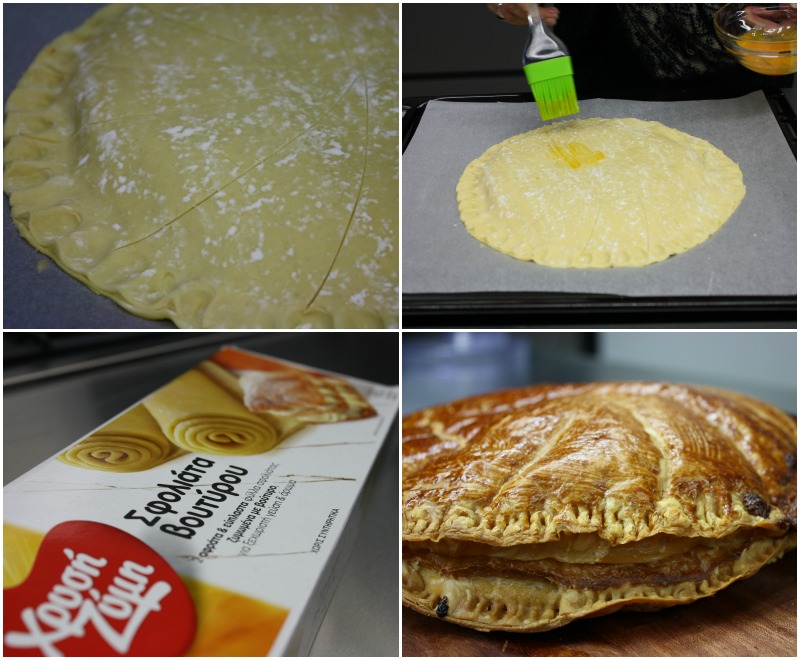 To make the small pies: Use the ready-made small, cut puff circles -each packet contains 20. In the centre of each puff base put 1 scant tablespoon of almond filling. Seal the sheets exactly as described above and bake in the preheated oven in the middle rack for 20 minutes. Then, lower the pan and bake for 10 additional minutes. 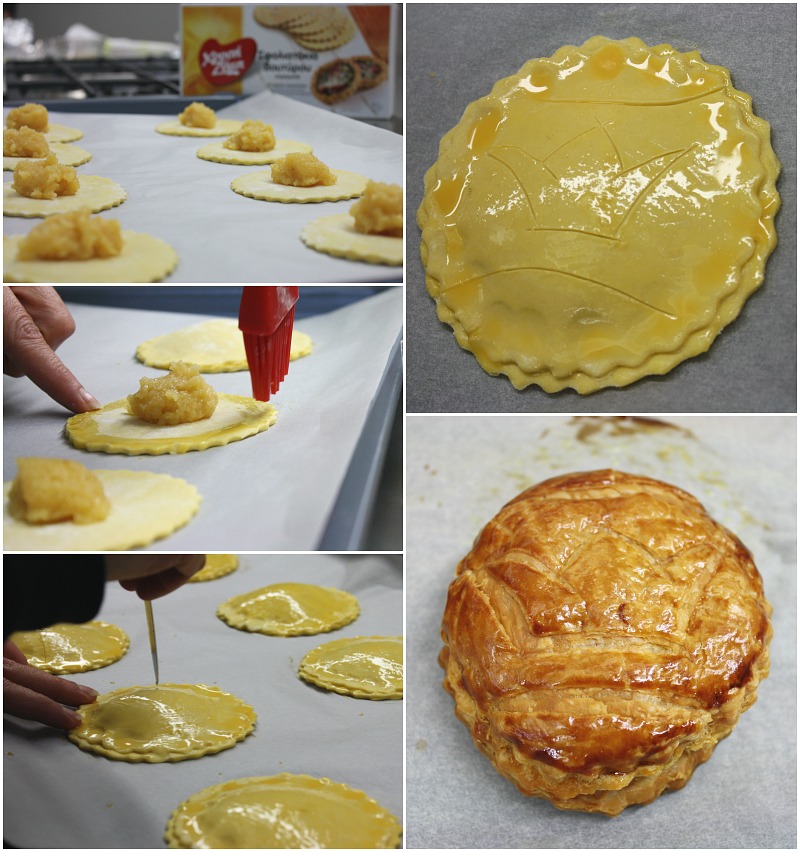 To serve: Put the bigger kings pie in a platter and cut it in the table in front of everybody. Share the pieces randomly and be extremely careful when biting! If you decide to make the small puffs, choose one to put the bean/figurine inside and distribute respectively. Beyond the traditional use of the Kings pie, you can always have it as a delicious breakfast or as a treat with your afternoon coffee. 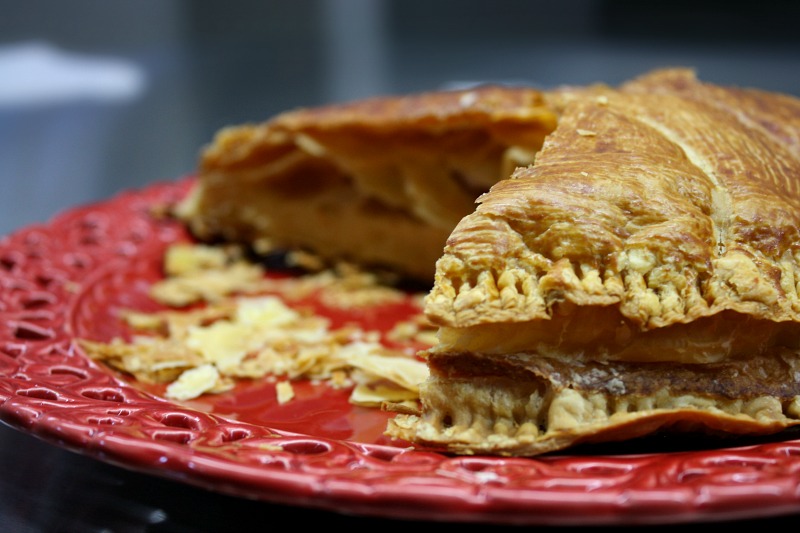