How can we easily make grilled squid, octopus and illex at home? When it comes to cooking meat, we can all agree that BBQ is considered to be a male thing. And when the time calls for the seafood to hop on the hot grill, we give men some extra credits and respect for their great expertise and their artful mastery. They certainly deserve it as they usually know how hot the rack should be, how much should the tentacle sizzle, when to turn the illex around and for how long. In case you, too, have questions like these and this stuff seems (a bit) complex but enough to discourage you from unleashing your cooking creativity, this is your chance to regain the lost ground and your prestige against your all-knowing friend.

It’s already summer and the idea of seafood is well placed in our minds when we plan friends and family gatherings, even if they are not by the sea. For such reasons we have chosen grilled squid, octopus and illex as the perfect appetizers for our BBQ sessions. Their cooking is simpler than you imagine and it looks. So let’s get this straight too, shall we? 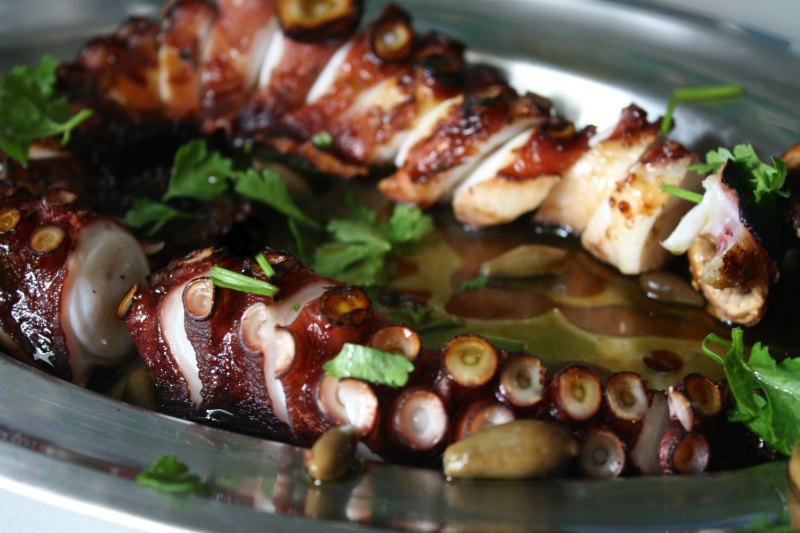 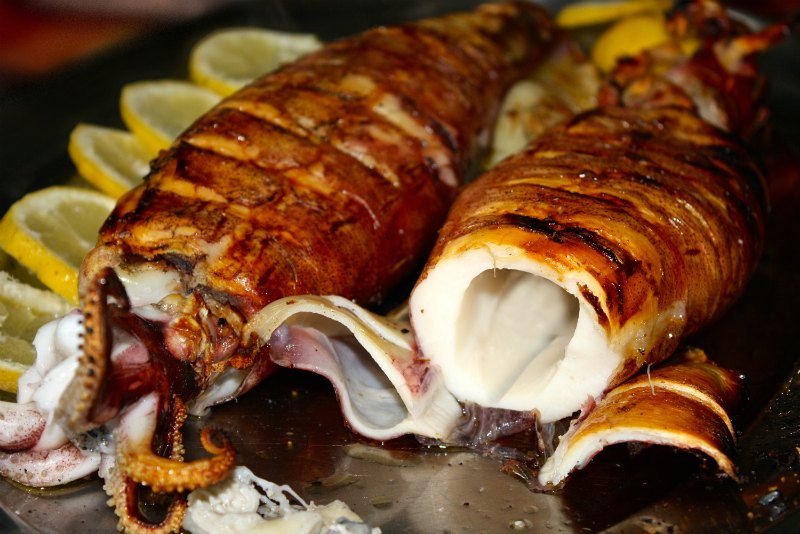 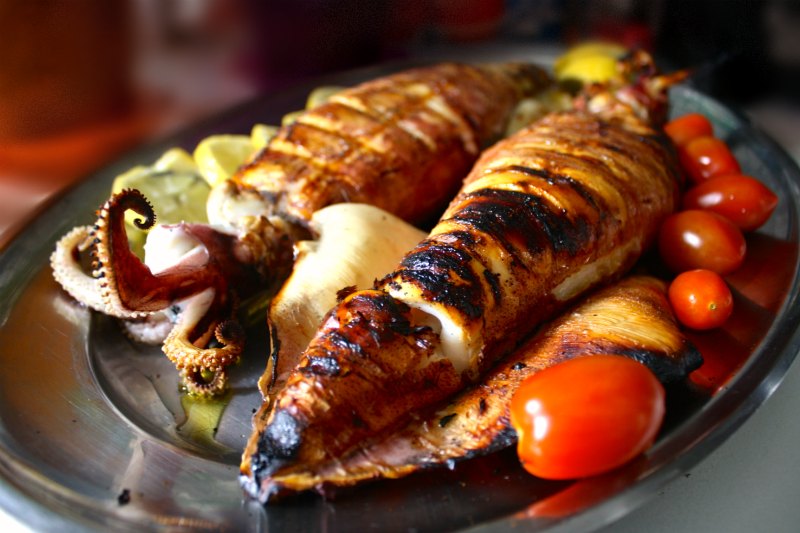 Ah, this grilled squid we ate in…

Μyth 1: That fresh squid, octopus or illex we had in that Greek tavern by the sea with decorative tentacles lying in the wire, waiting to be blown by the Cycladic wind, is 95% not fresh, but from frozen. And yes, it is tasty and if well cooked or grilled, it can be delicious.

Don’t naively ask why it is lying there to be partly dehydrated (that normally it isn’t supposed to, it should only be aired in a shadow place even if you want to dry it, in order to maintain it as they used to do in the past) or why it is supposed to be contributing to the island’s couleur locale.

Μyth 2: Fresh is best of course. The one really fresh and properly tenderised by the fishmonger pared, yes. For the rest, the norm is not definite. A frozen octopus as a fish likewise, can be more fresh than the fresh, because it is put in the freezer right when it’s caught. Of course, a Moroccan octopus or one from the Atlantic isn’t equally tasty as a Mediterranean one or even a Greek one (well, we do have the most tasty fish after all), but if the cooking/grilling is perfect, one will have difficulty telling the difference.

The dozens of octopus, served all year round and especially during summer, are highly unlikely to be fresh and tenderised by hand or the washing machine. My friend John, a true fishing aficionado, who also cooks some great octopus, prefers the fresh security of the frozen, if he hasn’t caught it himself. Same with Manolis, in the cooking greatness of whom we owe the debunking of any difficulty in handling/cooking process.

Myth 3: Grilled squid, octopus or illex, they’re all the same. No, they’re not. The king among the three is thought to be the octopus, with its tasty meat, slightly grey colour, filling and with a smell that instantly reminds you of the sea.

The rosy squid follows, that with its skin removed it’s left white and fluffy with also a nice smell. Last in the ratings comes the illex with the large flaps/fins and a yellow-grey colour. It’s meat is considered inferior compared to the others, something that is quite visible in its price as well.

However, if you eat it fresh, grilled, after an amateur (fish) catch, you’ll agree that it is a perfect titbit. Squid, octopus and illex are always on the lists of low calories meals, but the octopus is believed to be the most difficult to digest.

Myth 4: In order for the octopus to be soft it needs to be boiled first. This is an invalid view and quite contested by the gourmet foodies and the devotees, because when boiled, the octopus loses a part of its exquisite taste. Period.

Whether you like it crispy (especially that last curly part of the tentacle) or soft, boiling refers to saucepan cooking only and it’s done within its own juices. Never in water, which we don’t use not even to unfreeze it. 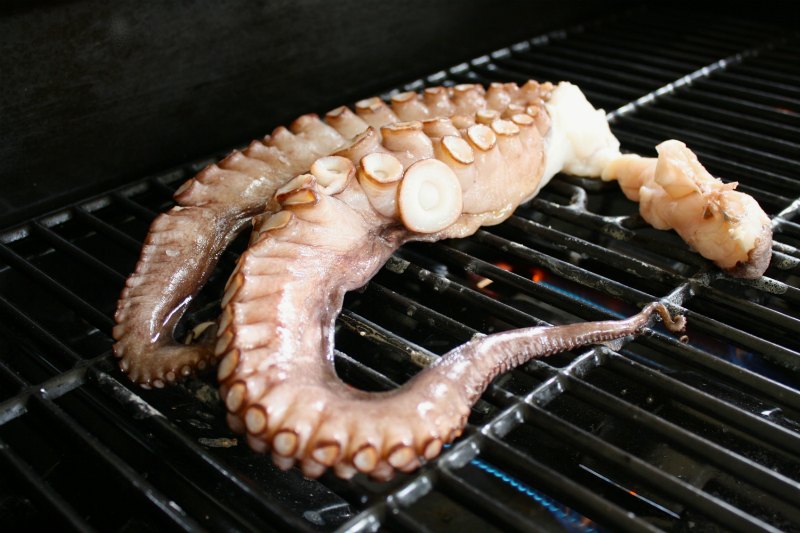 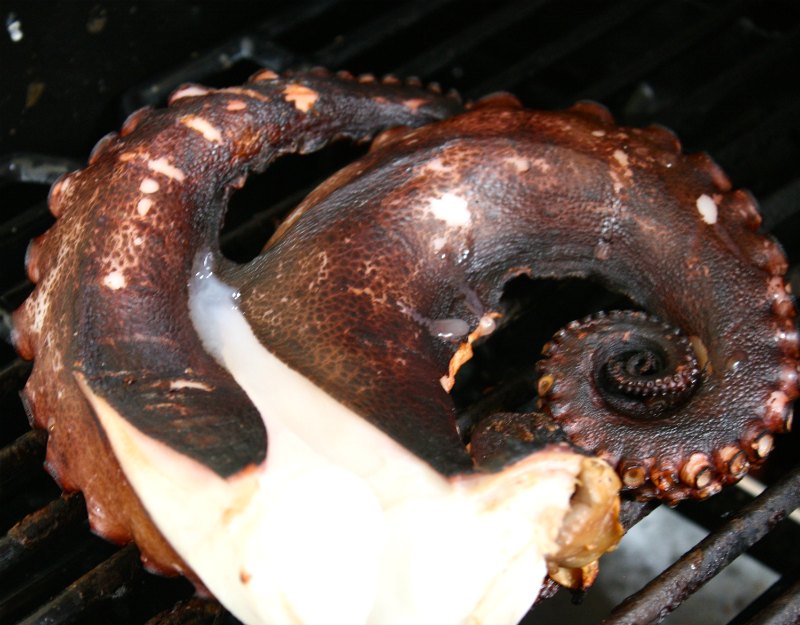 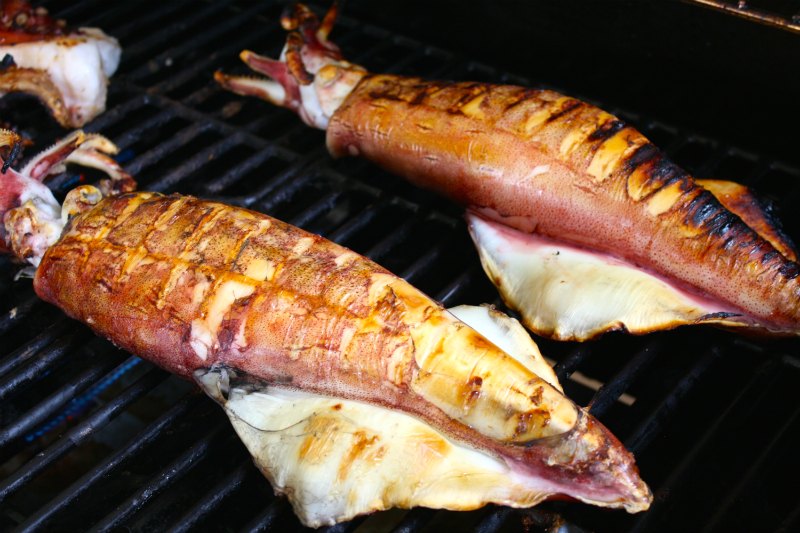 In this recipe, both three seafood used are from frozen and there was no marinade in olive oil, something that is often done and considered to be a plus.

For the final meze i refer you to the photos, just noting in the technical part that the temperature should be moderate (200C) and, if instead of gas grill BBQ which is controlled, you grill at regular charcoal, the fire should be medium-low direct heat without visible flame.

Another tip to remember is that when grilling at charcoal, the time is drastically decreased reaching even half (or less) than the indicated in the recipe below, so (in half the time or less) you should calculate the turning over of the meat respectively. 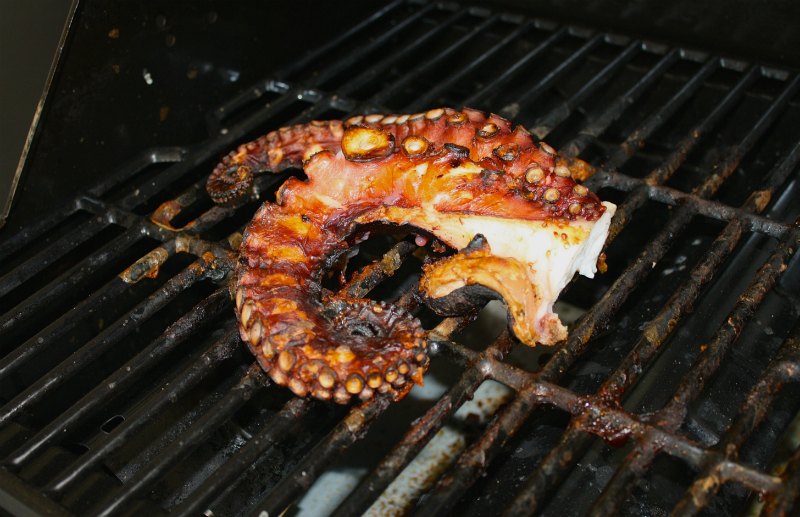 Preparation: 10-15 minutes for washing and cleaning of the squib and illex (removal of the pen, the transparent bone in their body) and cutting of the octopus tentacles. Approx. 1 hour for the barbecue in gas grill or 20-30 minutes if you use regular charcoal grill. Meanwhile, prepare your drinks and enjoy the smell while the seafood are getting ready. Easy recipe. 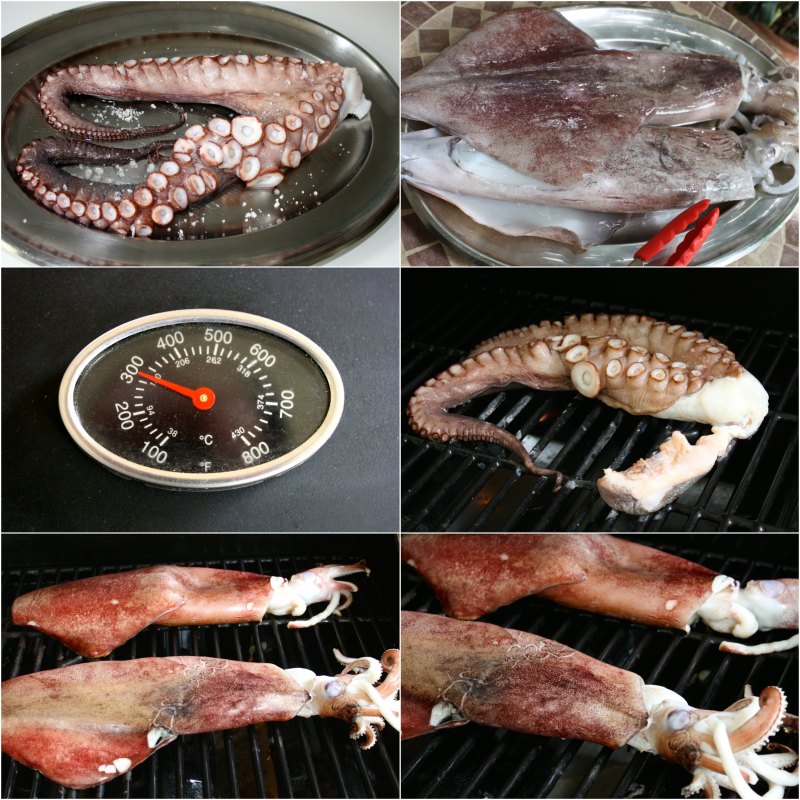 Preheat the grill at 200C.
To salt and grill the seafood: Throw some kosher or flaked sea salt at the squid, octopus and illex, put them in the grill and leave them to rest without constant turning overs. Specifically, turn the octopus over every 15 minutes (for tentacles of specific weight) and the squid/illex once every 25 minutes.
Note: If our hand “itches us” to play with the octopus, we can turn it around as many times as we want. However, we shouldn’t do the same with the rest, as the fluids gathered inside the body will be lost and they will dry out quickly. 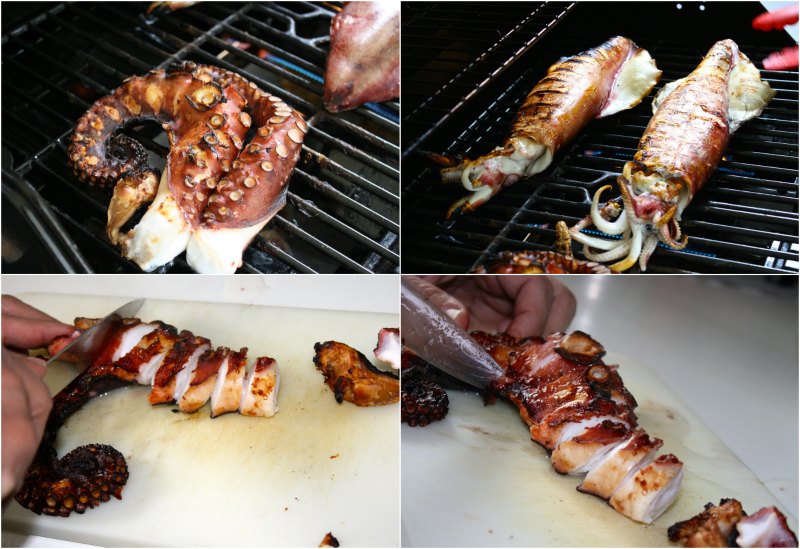 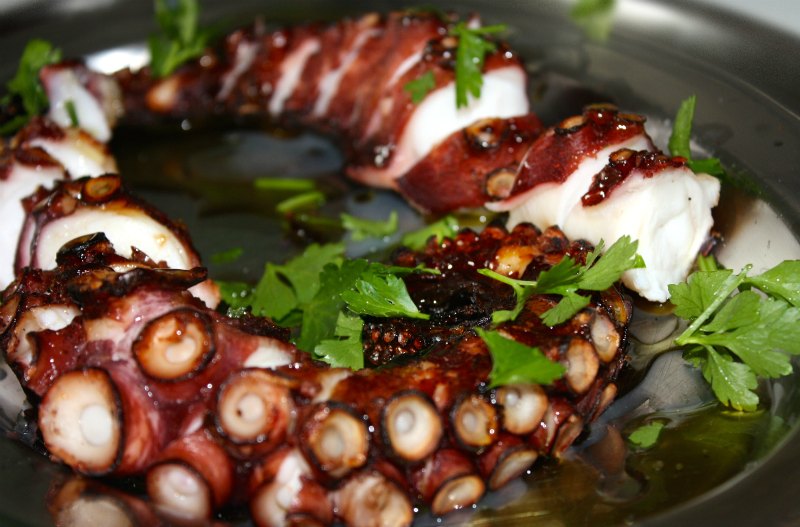 To serve: Keep your meze simple to maintain their nose breaking smell. You can add a few slices of lemon to the grilled squid, octopus and illex along with some caper, cherry tomatoes and a thin, fine line of extra virgin olive oil to take them to the next level. 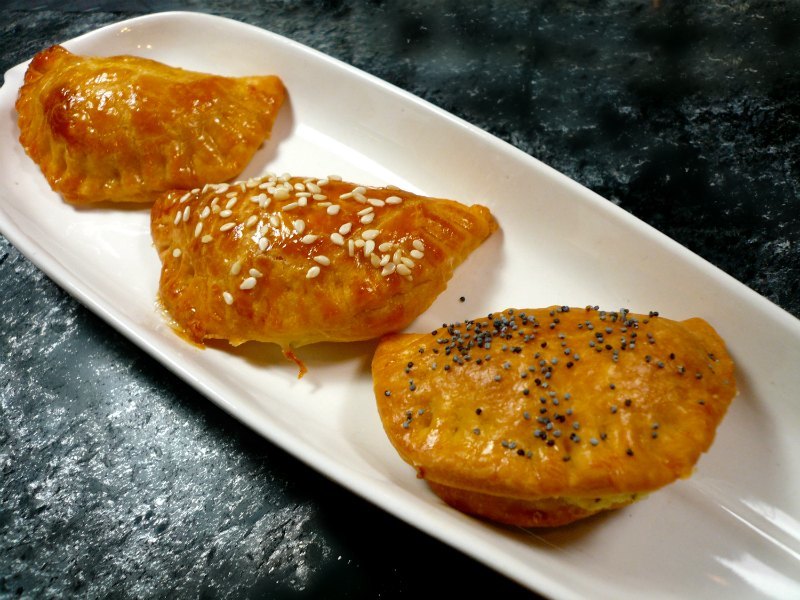 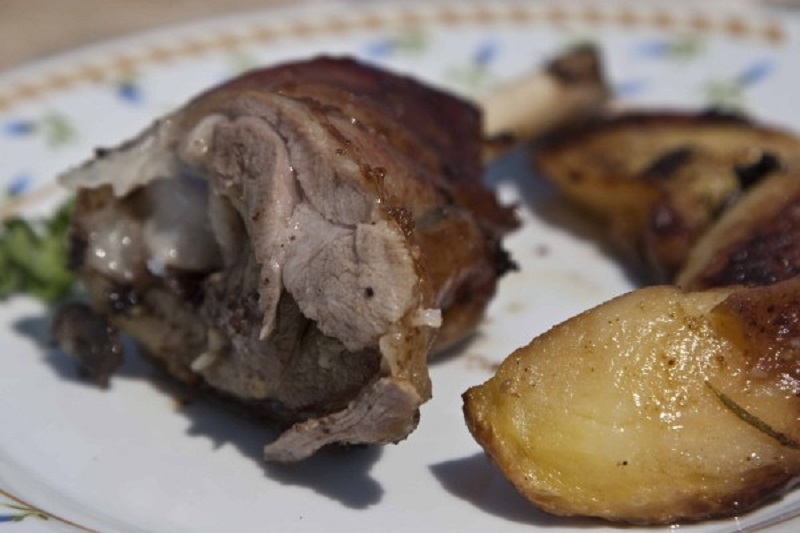 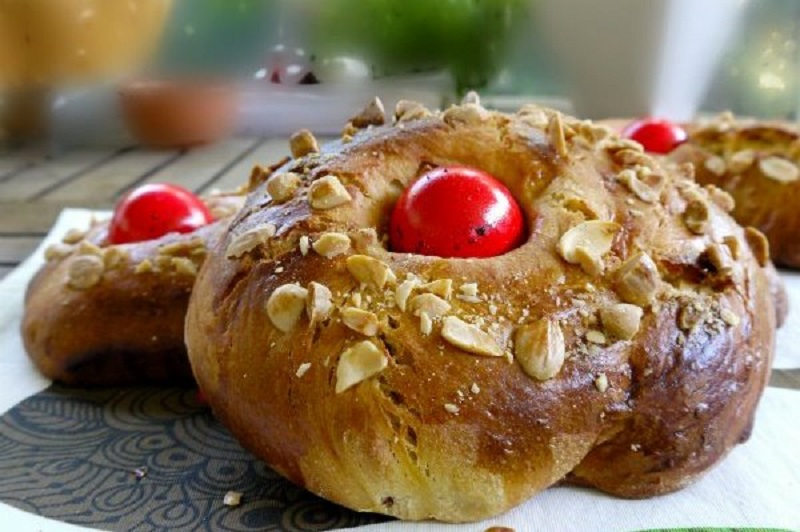 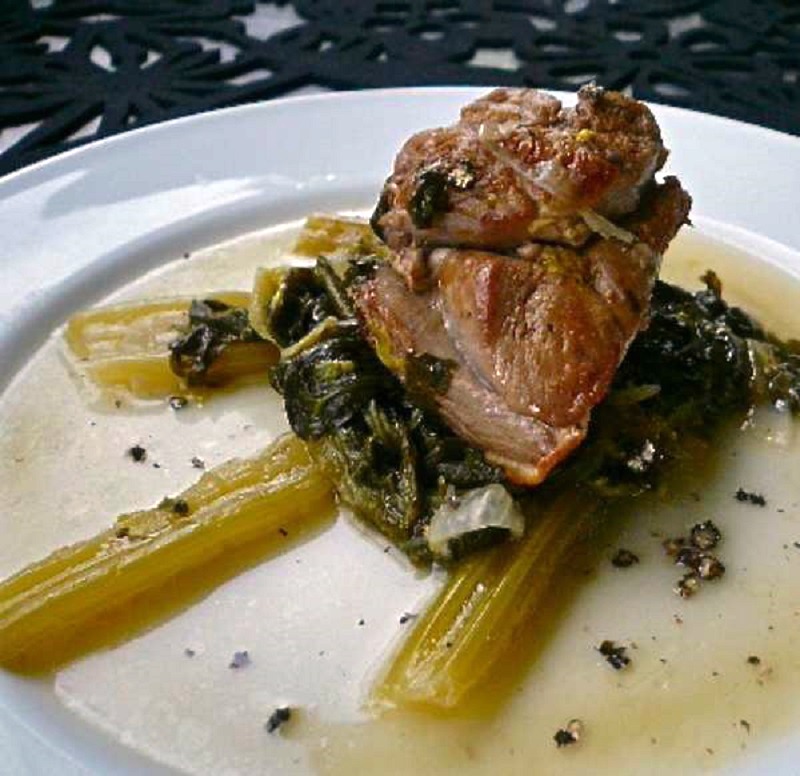 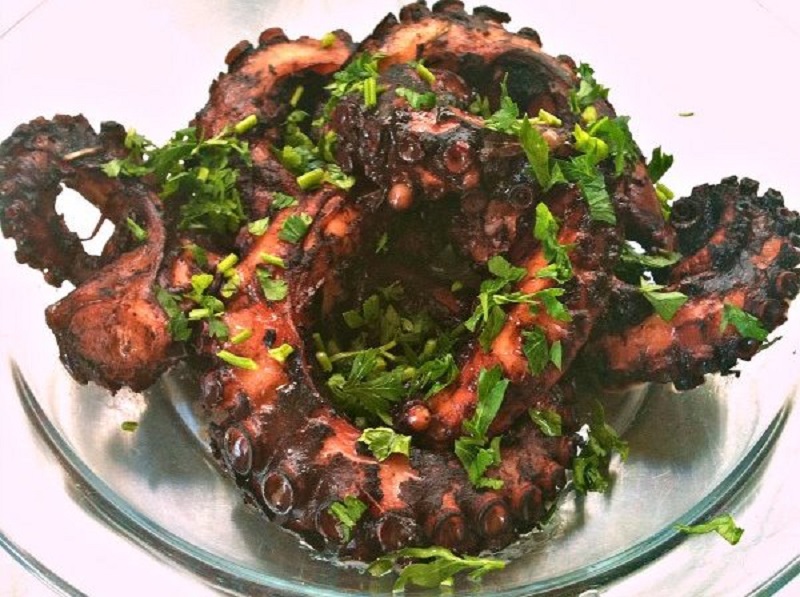 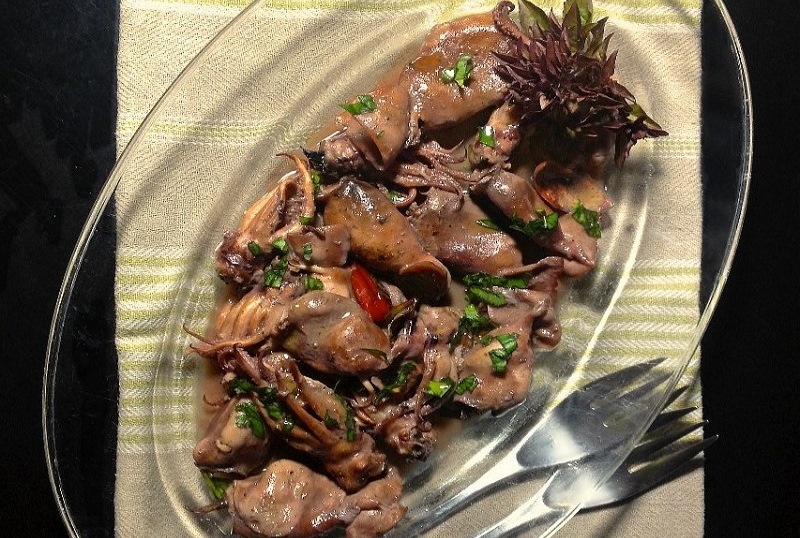 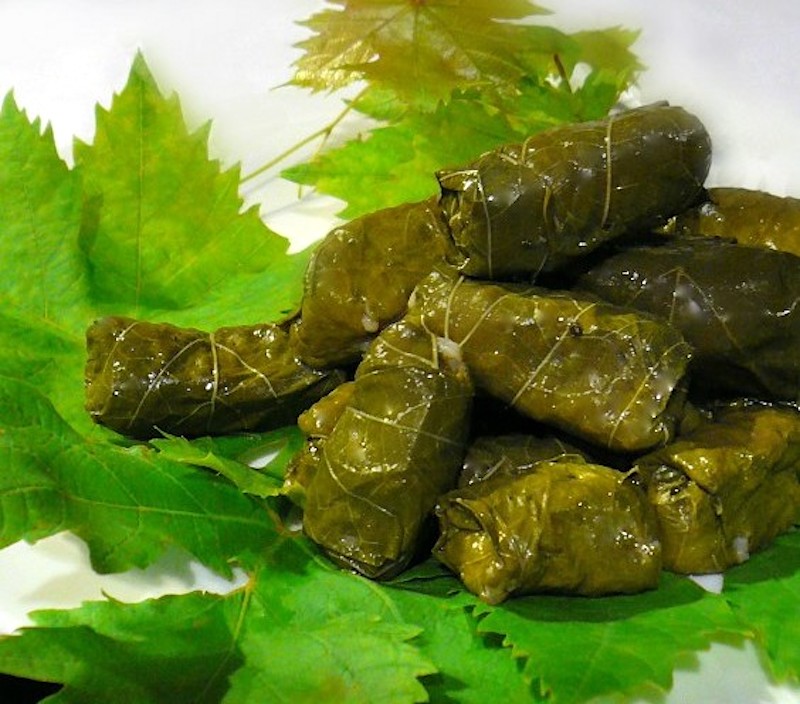 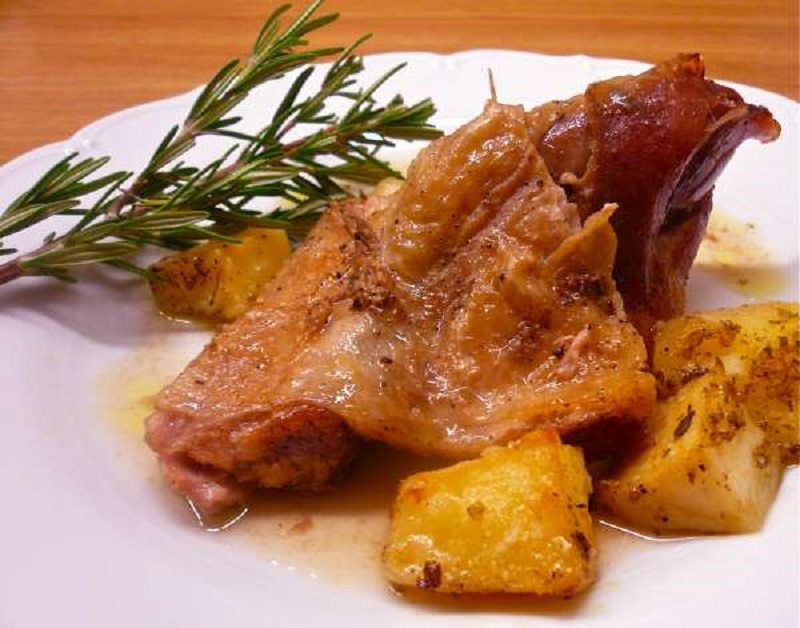 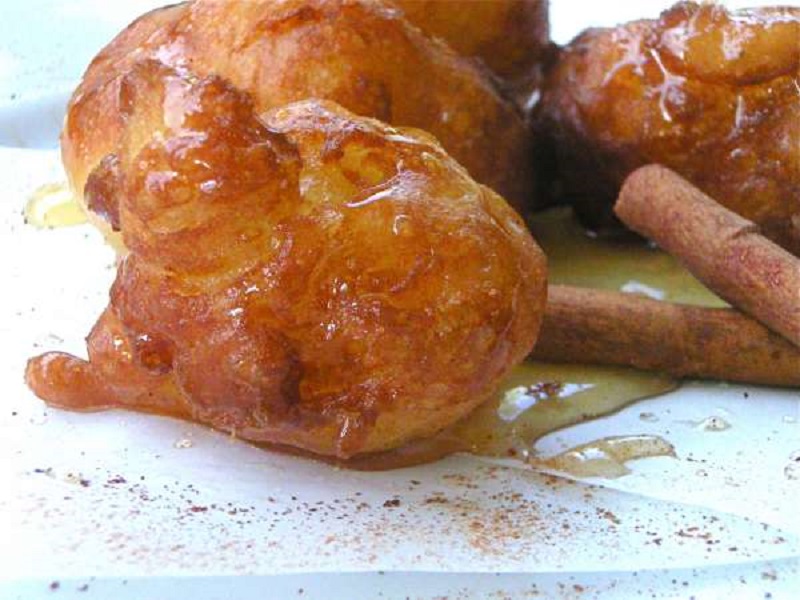 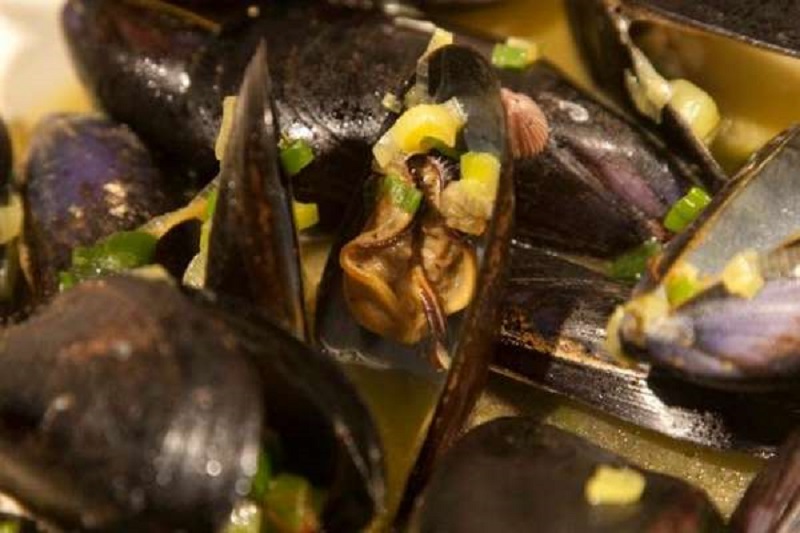 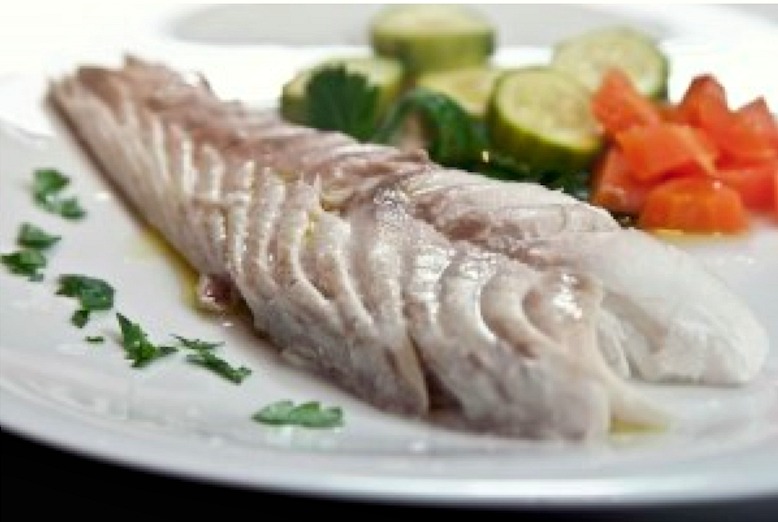