On June 12, 52 BC, in Potiolous, Cicero indulged in the writing of his literary work “ De Re Publica ” (On the Republic). He had returned triumphantly to Italy from Thessaloniki and was thinking seriously of accepting the promagistracy in Cilicia. Although he had favored Pompey and promoted him to the Senate, the relationship between the two men was extremely poor. His recent speech about Milon (Pro Milone) didn’t have

the required strength as well, and he knew this. By the time he sat down at the table to enjoy his favorite lasagna, several thoughts were besieging his mind and competing for his attention, which had become immersed in the pleasure offered him by the aroma and taste of the pasta.
Publilia had discerned his worried state from his furrowed brow and had asked to prepare the lasagna especially for that dinner, even serving it on the big silver platter while still piping hot. The smell alone was capable of producing miracles.
– “Publilia amore mio, this lasagna tonight is excellent! The flavor displaces even the Senate, ” said Cicero to his wife in his gratitude, staring at her while passionately sucking in the smell of the food in the air. His second wife had saved him many times so far, first with her money, and occasionally with her inexhaustible ingenuity in flattery. Nothing compared to Terentia, his first wife, who was moreover strong-willed, stubborn and a libertine…
– “Amore Mio, only you can appreciate all the wonderful things…” she replied, in facile flattery, sure that his low morale was in need of boosting.
– “I’m afraid Milon will be banished” told Publilia, with skepticism. “The audience was very unfriendly, Amore,” he added and bolted a mouthful gluttonously, which made him feel better immediately…
– “Don’t think more, amore mio. The Senate is always peculiar. Your speech was laudable. Let’s enjoy our dinner tonight…”

According to food historians, lasagna (long flat sheets of dried durum wheat dough) may have been the first form of pasta. They used to lay them under the hot Mediterranean sun to harden up and later cut them with special cylinders designed to create curled edges. The cooking instructions were the same as those for bread. When cooked it looked like today’s lasagna; several flat sheets of pasta with layers of a savory mixture in between and baked in the oven. Some claim that its distant ancestor is the Greek laganon (λάγανον)– a kind of unleavened thin bread or pancake. Others say that the word “lasagna” comes from the Italian word lasania (cooking pot). 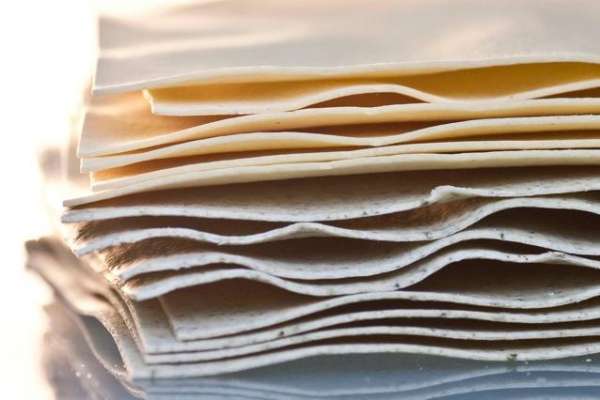 In classical Rome lasagna were cut in lines known as lagani (singular laganum). Baking lasagna demanded the use of an oven, a luxury only the wealthier families could afford and so, lasagna were considered a premium dish. (Dictionary of Italian Food and Drink, John Mariani, Broadway Books, 1998). Cicero loved them, and so did the poet Horace (I don’t know about Virgil, if you know please do tell me… I’m interested), who preferred them with leeks and chickpeas. Horace presented the dish as an example of a simple agricultural diet while he was promoting his own simple lifestyle in a farm manor Augustus gave him in Tivoli.

So lasagna in the 1st century were popular among intellectuals while in the modern sense of the term they had appeared in Italy by the 13th century. In the Middle Ages they were among the popular pasta and were usually creamy sweet dishes with multiple layers. (Oxford Companion to Food, Alan Davidson).

Preparation: Choose a nice baking dish of clay or glass that can be presented on the table – in any case the smell of lasagna with bolognese sauce alone is enough to win over everybody. The recipe isn’t difficult but like many good things it is quite complex, it takes some time. You can prepare the lasagna in advance, cover them with cling film and store them in the refrigerator a day in advance or the freezer for the future. Just remember to allow them to thaw until they reach room temperature before baking. 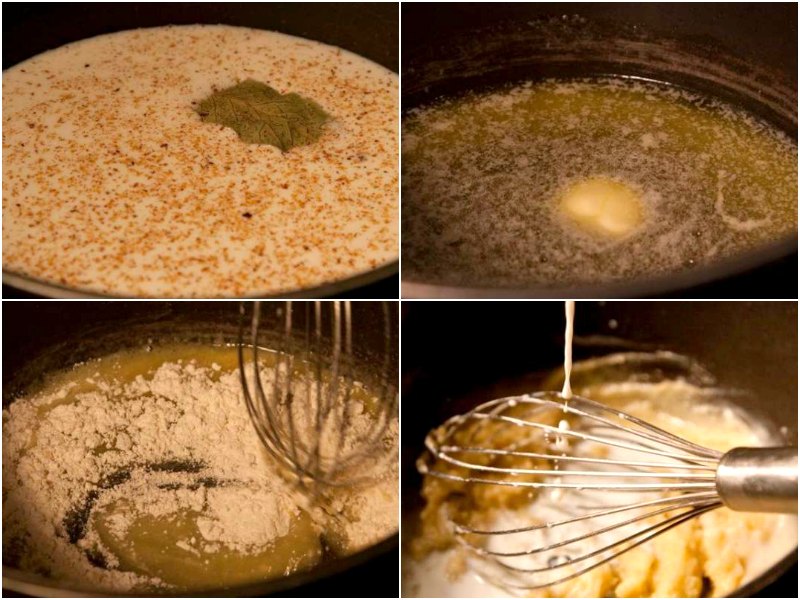 To prepare the béchamel sauce: In a small sauce pan, heat the milk, bay leaf and ground nutmeg. Be careful not to let the milk boil. Melt the butter in a medium pot, remove it off the heat and gradually add the flour, stirring constantly with a whisk. Gradually pour the milk through a sieve into the mixture, stirring.

Return pot on heat, always stirring, until the sauce boils and thickens, about 6-10 minutes. Add salt, pepper and nutmeg (2-3 pinches max -too much nutmeg will make it bitter). Set aside and cover with cling to stop the crust forming.
Preheat the oven to 200° C (390° F). 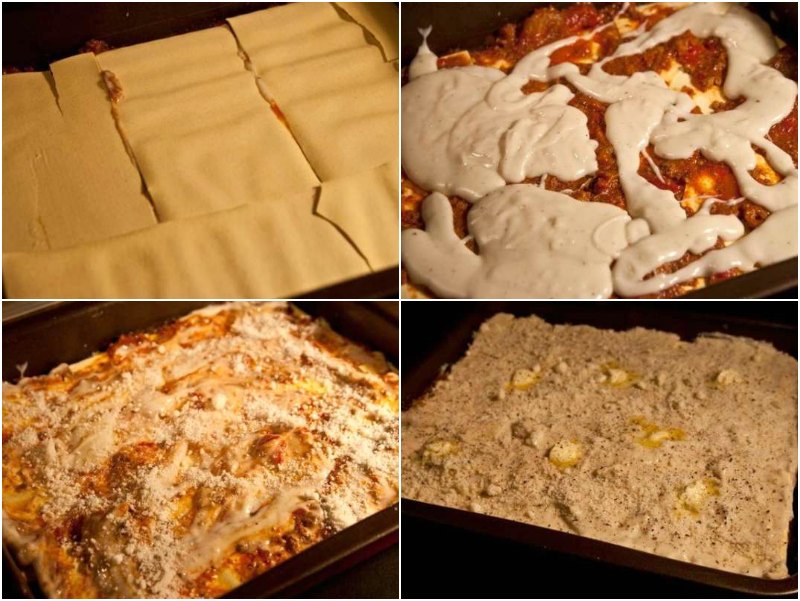 To assemble the lasagna: Make sure you’ve got all the ingredients next to you: minced meat, béchamel, lasagna, parmesan and butter. Spread 1-1.5 tbsp Bolognese sauce on the bottom of the tray and place neatly a layer of lasagna to cover the bottom of the dish as much as possible. Cut the lasagna if needed.

Divide Bolognese sauce in 3 or 4 equal parts, depending on how many layers you want. Spread a thin layer of bolognese, about a 1/4 or 1/5 carefully scattering it disorderly on top of the pasta, without covering them completely. Next, add a layer of béchamel and sprinkle with cheese. Continue layering the ingredients in this order, and finish with lasagna covered with béchamel.
NOTE: Don’t make more than 5 layers. I recommend 3, maximum 4. It’s better to make a second baking dish of lasagna. Use the cut pieces of lasagna to cover the gaps.

Sprinkle grated parmesan over the béchamel and scatter with small pieces of butter.
Bake lasagna with bolognese in the preheated oven for 25-30 minutes or until you get a nice rose colour on the surface. Remove from the oven and let it cool for (at least) 5-10 minutes (10-15′ in the summer) before serving.
To serve: Place the baking dish with the oven-baked lasagna with bolognese and béchamel sauce on the table and cut in large squares. 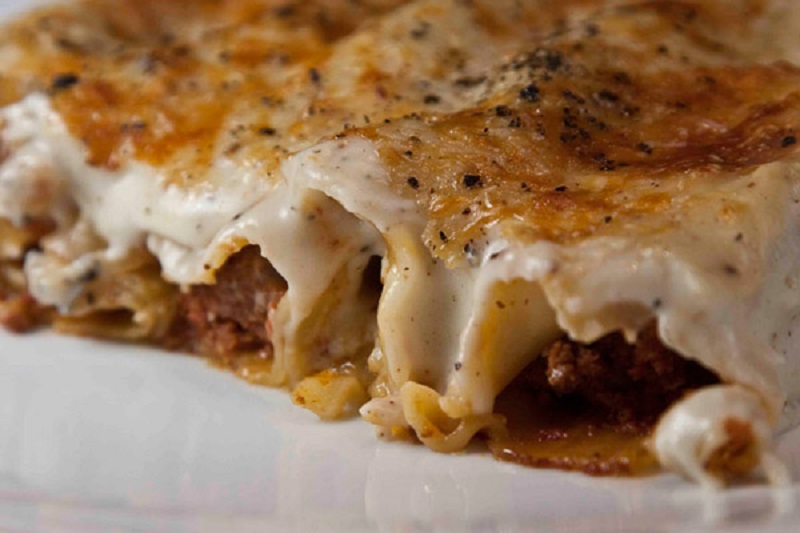