The most famous spaghetti dish of Sicily and exported product in the world, pasta alla Norma, was born in Catania and was dedicated to- named after and related with the other famous of the place, the heroine Norma, from the namesake opera of the also famous and ex Catania composer, Vincenzo Bellini.
The Casta Diva aria (…che inargenti queste sacre antiche piante… from Felice Romani’s libretto), with the amazing voice of Maria Callas, who boosted the works of Bellini from the 50s and on with her excellent performances — recommended while reading this history, but particularly during the making of the recipe. So i quote here the beginning — turn up the volume if you cook or put headphones if there are others listening.

In Catania, Norma escaped Bellini’s music and became a synonym of Non plus Ultra, the definition of the best for everything. Even if the word is written with a lowercase n, ‘showing the rule’, the chance to include food too, wouldn’t be impossible, as, for the most of the good old gourmet foodies, it means the excellent quality of traditional gastronomy.

The ancient expression “Pari ‘na Norma” meaning resembles Norma, the ‘role model’, showed and still shows the tendency towards exaggeration that characterizes today’s citizens of Catania. And of course, the history of the dish and the myth that almost surrounds it doesn’t lack exaggeration — you could say that it has everything.

Pasta alla Norma: the compliment that became a name

According to the Sicilian tradition, the name pasta alla Norma, was given by the (Sicilian of course) poet, Nino Martoglio, impressed as he was by the exquisite blend of the tastes, attributing the value of musical patterns to the pasta.

History states that in 1920, in Musco and Pandolfini house in Etnea Street, a family dinner was meant to have a historical perspective. Catania actor Angelo Musco, was a middle-aged man still living with his beloved sister Anna, the wife of Giuseppe Pandolfini with whom she had two sons: the comic actor Turi Pandolfini and the youngest Janu, a comedy writer (later a clothing store owner), married to Mrs Saridda D’ Urso.

That autumn day, everyone was gathered in Janu and Saridda’s apartment in a family reunion, having also invited the well-known theatrical writers and journalists Nino Martoglio, Goofy Marchese and Peppino Fazio. When Donna Saridda brought the spaghetti with tomato sauce, basil, fried aubergines and grated salted ricotta in the table, and after the first sacred bites, the very talented with words, poet and gourmet fan, Nino Martoglio, said as a compliment: “Signora Saridda, chista è ‘na vera Norma!”, which meant ‘ Mrs Saridda, this is a true Norma’.

With so many writers, comedians and journalists gathered around that table, mouth-watering over the delicious recipe, it was more than expected for this phrase to spread in the living rooms of Etna street – that is how it was done in the beginning of the century- and then in the whole city.

Since then, the unforgettable for his comedies Nino Martoglio was credited the official name-giving of a popular Catania dish, just by speaking the right old expression in the right company at the right time, adding even more senses to Vincenzo Bellini’s art [the story is published among other elements in the – now- rare book of Pino Correnti, Il libro d’oro della cucina e dei vini di Sicilia, Mursia, 1976].

… or a snowy spaghetti mountain homage to Bellini

Another story connected with pasta alla Norma claims that while Vincenzo Bellini was writing his masterpiece, he used to go to the same restaurant and order the same spaghetti dish. Once the opera was made public, the owner of the restaurant decided to become the dish’s godfather and name it after the musical play in honour of the composer.

Note that during that time, it is said that pasta alla Norma was impeccable in terms of appearance. The pasta created the shape of a mountain, in the foot of which the fried aubergine was laid (in pieces, circles, or slices). The mountain sitting on them, covered with a rich red sauce, and white trimmings of salty ricotta was supposed to be the Etna volcano -with its lava and snow included.

… or the excited best friends

A third version and variation of the first, prefers to have as leading actors the best friends of the great composer of bel canto, that wrote Norma and first presented it on December 25th 1831 at La Scala in Milan, in a packed yet uninteresting audience, as Bellini characterised it. He felt very disappointed and said that the performance was a fiasco and the execution of the first act was boring, at least of the first one — in the second act, soprano Giuditta Pasta, who made her debut playing Norma, cheered up a little and the project was fortunately saved.

Despite the cold feet of the premiere and given that the play’s’ success was built slowly with the next 39 performances in Milan and Bergamo, the last story about the name-giving of pasta alla Norma narrates that Vincenzo Bellini’s friends watched the opera and were so impressed that after leaving and while walking around, commenting on anything they saw and thought it was magnificent with the phrase ‘una vera Norma’.

Thus, the word as a designation ‘fitted’ the pasta dish, when used to describe it (to be honest, this version seems really strange to me to be realistic, however, it could extend a relevant discussion during dinner). 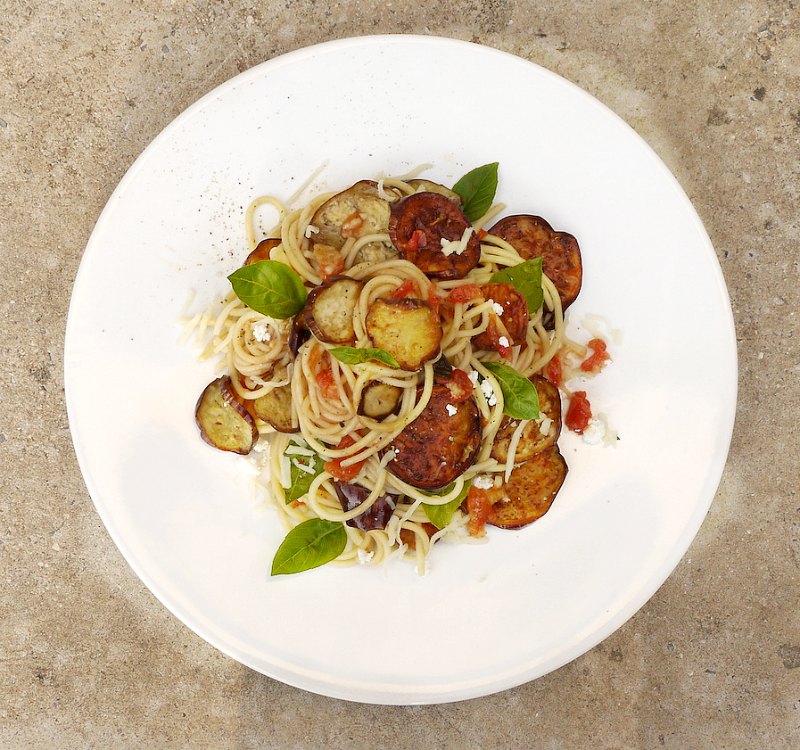 There is no restaurant in Catania that doesn’t honor the great composer with its menu by including the particular dish. Pasta alla Norma is the equivalent of pizza Margherita in Naples. Although homemade editions don’t exclude, as usual, little cooking interventions, as a typical Sicilian dish in its original version is made with specific ingredients that don’t leave space for – supposedly creative – changes. So, it is useful and good for someone to know the main idea behind the famous recipe, even if he decides not to follow it precisely.

The ingredients, all of them simple and necessarily local – Sicilians don’t even imagine to use a tomato selection that has not been produced in the island – are the following:

Finito. Cinnamon, cloves and nutmeg don’t exist in the original performance although they are featured on the internet and blogs about Sicilian kitchen. Neither will you find capers, peppers and olives in the local execution. 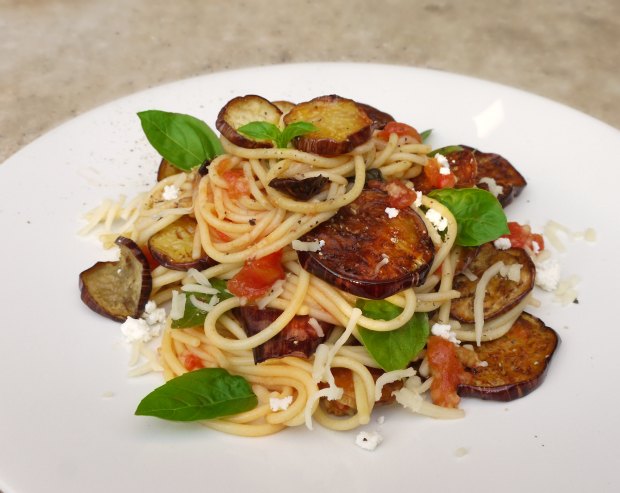 Pasta alla Norma is a Mediterranean-inspired first course, an ode to simplicity, a delicious piece nicely presented in its classic version to date. Of course, it’s the most appropriate for foodies who love opera. Its essence masterly embraces, like Bellini’s Norma does, combinations of pure flavors, and for that it stands out between many good pasta dishes, being an excellent choice for the most special table. Highly recommended.

Preparation: 1 hour. Prepare the sauce while the aubergines draw out their bitterness. Tomatoes are easily peeled if we dive them in boiling water for 1/2-1 minutes (depending on size). If you put 3 garlic cloves, skip the onion. It is more convenient to use a large pan for the aubergines, so you can make them in 2 batches phases. Easy recipe. 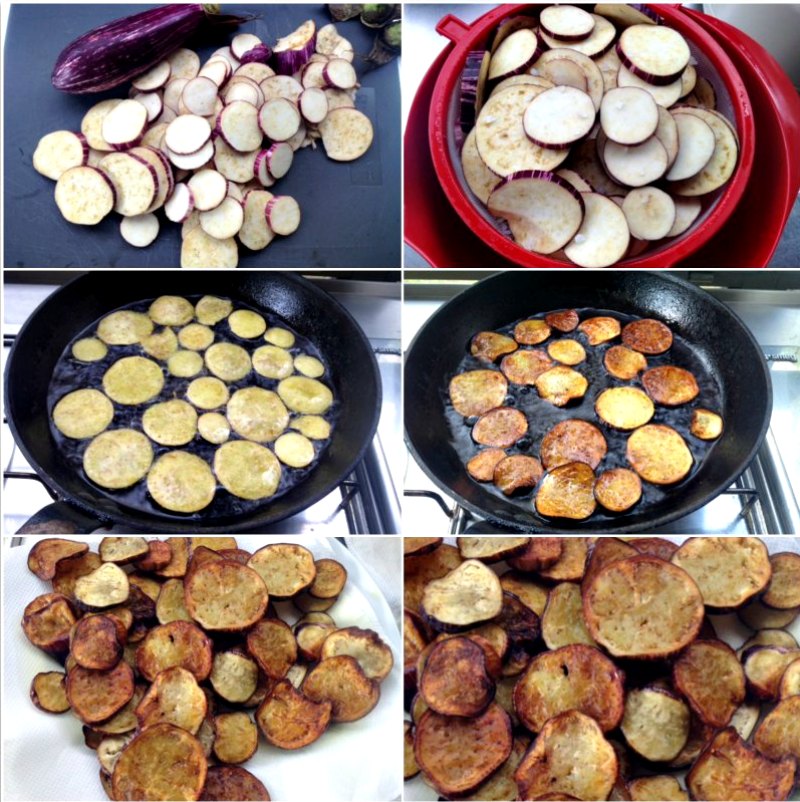 To make the aubergines: Sprinkle them on one side with salt and place them in a drainer in layers. Put a plate over them for extra weight and leave them like that for 30’ – 1 hour, to draw out their fluids and bitterness. Wash them out, drain and transfer to a kitchen paper.

To fry the aubergines: In a large deep frying pan and high heat, warm very well plenty of olive oil (almost 1cm) until bubbling, Add the aubergines in 1 layer each time. Fry for about 3 minutes until they are golden-brown, turning them around once -use pliers. Transfer them to a plate covered with an absorbent kitchen paper and adjust salt. Keep them warm without, however, covering them.
Note: Depending on the pan size, the aubergines will be fried in 2-3 units. Put the already fried at 70-80 degrees in a fan assisted oven, to keep them warm.

To make the tomato-basil sauce: In a relatively deep fry and medium fire, heat the olive oil and add (onion, if you use it) tomatoes, garlic, 6-7 basil leaves (the biggest should be cut), salt and pepper. Cook the sauce for approximately 20 minutes, until it has blended and the fluids have evaporated – the quantity will be reduced by approximately ¼. Try and correct in salt and pepper, if needed.

To prepare the pasta (before the sauce is almost ready): Boil in plenty of salted water according to the packet instructions (if they are Italian) to become al dente. Drain, keep 1 cup of the water where they boiled and mix it with the ⅔ of the sauce and half the cheese. Being familiar with the norm you can add, if you like, some aubergines so they already exist in the pasta. Our test (see photo) proved that the taste was enhanced. 😉

To serve: In a platter put a layer of spaghetti and spread part of the aubergines, cheese and basil leaves. Continue putting one or two layers in the same ways (spaghetti, aubergines, basil), pouring, in the end, the rest of the sauce (i remind you of the Etna mountain) and decorating with some aubergines on top. Add the last basil leaves, sprinkle with the rest of the cheese and take the spaghetti alla Norma straight to the table. You will use the same way to serve the spaghetti if you put them in separate dishes.