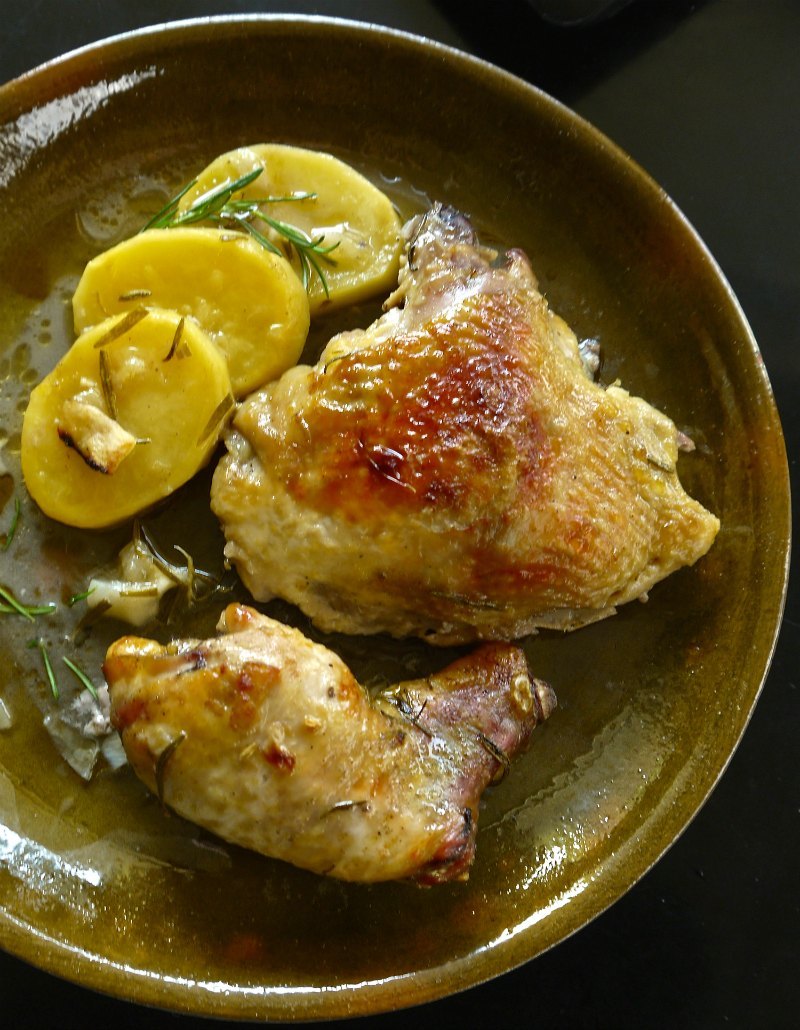 Roast chicken with lemon and rosemary was the top recipe of my friend Laura. A witty journalist specialized in researching oddly attitudes, characterized by her genius black humour and by her self- sarcasm games. A notable person to meet, indeed. She used to cook that dish in her famous “amici miei” nights (means “My friends” in English), a name borrowed by her favourite Monicelli film.

Every time Laura had friends over and wanted to give them an extra something she chose to offer “a night with a montage- of inspiring flavours”. Clever as she was, she knew how to make this happen without spending all day in the kitchen. Laura was a vera Italian, living in a grand palazzo at the heart of Rome’s historic centre. Old heavy doors with thick inlaid ornaments of wrought iron added mystery to this atmospheric setting. Upon entering you were sure that would appear a legionnaire-dressed butler -the palazzo was an ideal place for the shooting of a film…

Her ‘petite’ rosemary was proudly standing in the terrace, in a position where anyone sitting in the living room could see and admire it. It was put in big organically shaped flower pots made of stones. It was above 1,5 m in height and quite impressive. Laura was a nice cook, with a male logic of organizing things as well as an excellent hostess.

Her recipe is simple and gives space to one of the most aromatic chicken to steal the show. The fresh rosemary is intense and it has an intoxicating side that’s balanced by the strong lemon that usually dominates the senses. The combination of these two main ingredients has a drastic effect on the chicken, the result is impressive and lasting, especially if the poultry’s meat meets the quality standards. The third ingredient, garlic, is present in the right proportions, and if you generally like it you can add some more (up to 6-7 cloves) but don’t mash or mince it so it isn’t completely lost in the sauce. The recipe is called “chicken with lemon and rosemary”, Laura had emphasized and right after she had explained how “the mashed garlic’s policy when meets the oil is more expansive than Rome’s”.

The greek-italian dialogue was promoted by the potatoes. They become a base to support the chicken taking, at the same time, advantage of the “aroma-taste” due that develops throughout the cooking process. Also, they don’t disturb the convenience in preparing this dish, something that would be completely opposite with the whole philosophy behind it. Therefore, I highly recommend them, knowing for sure that Laura would welcome the unity and the initiative in the strengthening of relations.
Long story short: One of the most delicious and easy recipes for the poultry which holds the lead of the daily cooking.

Preparation: 15-20 minutes plus the marinating (at least 1 hour) and 50 minutes for the cooking. Prepare the potatoes while the chicken is marinated. Choose a presentable baking dish if you want to serve it in it directly. Very easy recipe.

Ingredients (serves 4-5)
1 chicken 1.5-1.7 kg, cut in 8
2 juicy lemons: a) use one for its juice and 1-1.5 tsp zest, and b) unpeel the second one (the white part two if possible), remove any seeds and cut in cubes of 1-1.5 cm.
5-6 rosemary twigs, the leaves only partly cut with your hands.
4 garlic cloves, cleared and cut in slices of 3-4mm. depending on their size (no skin)
100-120 ml olive oil (don’t overdo it, chicken has its own fat too)
4 big potatoes roundly cut of approximately 1 cm.
salt, freshly ground pepper
4 rosemary tufts for the serving To marinate the chicken: Mix olive oil, lemon juice, zest and lemon cubes, garlic, rosemary leaves, salt and pepper. in a bowl. In a separate bowl put the chicken pieces, pour the marinade and stir until the fluids have covered the poultry’s surface. Arrange the poultry in layers and spread the mixture to fill all the pieces, on and between.

Cover the bowl with cling film and allow to marinate for 1 hour (or more if you want, in the fridge)
Preheat the oven at 240 ℃.
To cook: Lay the potatoes in the base of a baking pan, add salt and pepper (don’t put too much as they will absorb the chicken’s too) and put on top of them the chicken pieces in a single layer (don’t leave too much space between them). Turn the skinned chicken pieces upside down (e.g. breast) with the skin on the underside. Pour the marinade and bake in the preheated oven for 15 minutes. Turn the pieces around and bake for 20-25 minutes. Switch oven to fan-assisted functionand bake for 10 more minutes. Thus, the overall baking will last 45-50 minutes.

To serve: Straight from the oven and in the middle of your table, the roast chicken with lemon and herbs will fill the air before even serving it, tickling your nose and appetite. Highly recommended, so make sure you have the suitable tableware, otherwise serve in classic dishes (warm if the weather is not) with potatoes topped with 1-2 tablespoon of sauce (not on the crispy chicken). Next to that, the ruby chicken pieces and some leaves of fresh rosemary for the decoration.