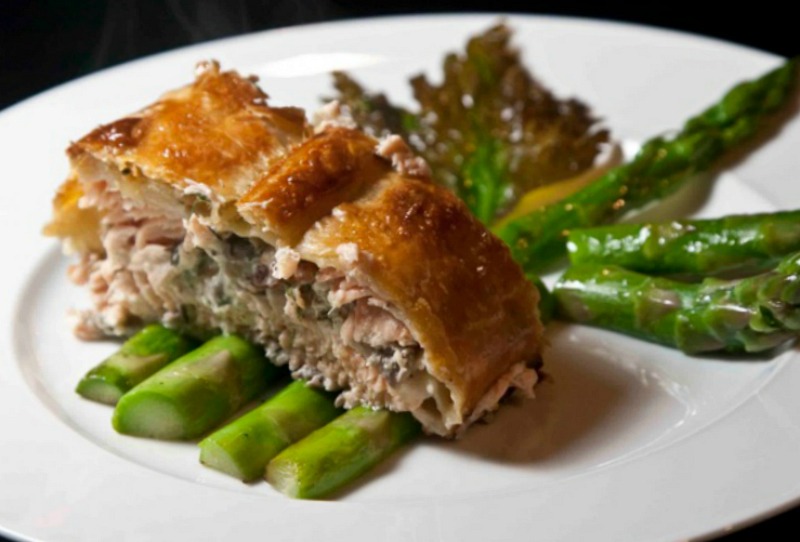 This variation of the classic Wellington recipe to a fish dish does not lack impression or surprise. Surely, salmon Wellington or salmon in a puff pastry wasn’t part of Arthur Wellesley, Duke of Wellington gastronomic fantasies, who is the possible godfather of the whole category, since the said noble rarely strayed away from his favourite fillets and truffles, as rumours say. And plain, without the creak from the wrapping.
Salmon, wrapped in a browned laminated dough, is the neoteric newborn in the Wellington culinary tree, as the sausages, the hunt or the veggies are too. It keeps its scaly texture hidden inside the creamy sauce and preserves the decadent glamour of the famous family. 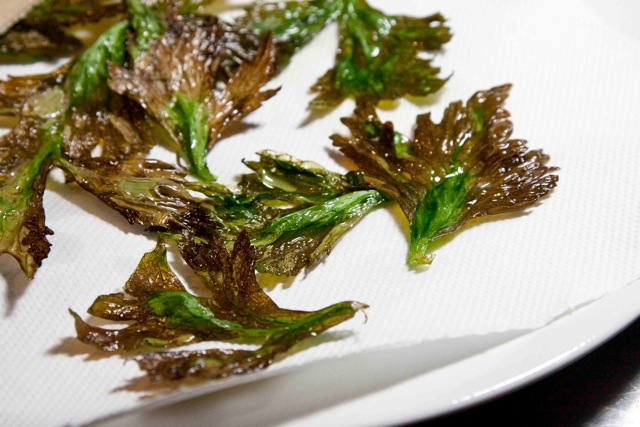 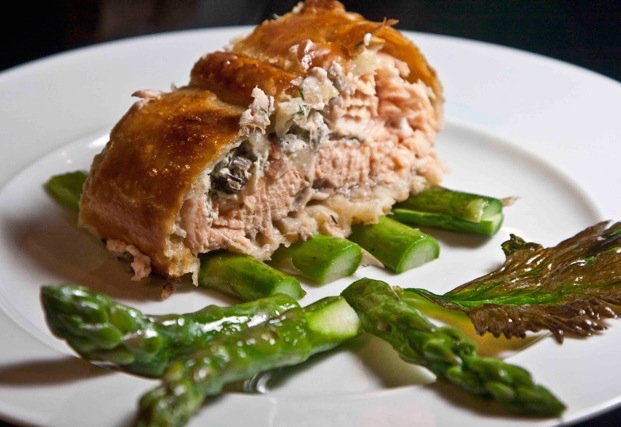 It is a dish, the inside – out of which can be made either quite simple or quite complex and obtain multiple tasty readings. Mushrooms are considered a must in this case, and they do also have a name when many of their varieties (domestic and wild) are mixed, chopped and sauteed with butter and herbs to become a mass. They are called Duxelles – you can’t have a more French controversy than that when it comes to the historic counter with the British Wellington-, an invention of 17th century that is credited in the French cuisine patriarch, François Pierre de la Varenne.

Salmon in a puff pastry (salmon en croûte) has never left anyone untouched, culinary experts, dedicated fοllowers or gourmet fanatics – insert your opinion here freely. Any chef that has some respect for his hat has at least one relative recipe in his cooking portfolio., as the particular theme is a great inspiration from rustic executions and fusion (sometimes even confusion) remixes to contemporary molecular cuisine.

I was meaning to write about the particular salmon for quite a while now, since the recipe, based in the classic idea of the related Wellington, has been created long ago. In the pictures, you can see two creations: a simple, organised in minimal parallelepipedic shape and a second one more complex, ideal for fluctuations in quantity and playing of any kind.

Salmon Wellington is a rich dish, not necessarily heavy, because of the very raw material of fish that has a meaty and hearty personality. Now, the weight is given to the rest of the ingredients, to play a role that will blend with the salmon highlighting the beautiful contrast created by the crunchy coating with the baked puff pastry, that offers the dish an extra moist, plenty of aroma and texture variations on individual flavours and colour. It is very important that it doesn’t become dry because then, a nice sauce won’t be enough to save the day. The fish inside the puff pastry should be baked correctly.

Like any Wellington (check the deer fillet and the pork fillet with porcini in previous recipes), salmon in a puff pastry belongs to these dishes that first win the impression game and then, as the mounted levels of taste-texture unfold, comes the tastiness of each bite, melting in the mouth until it has completely conquered your senses. The accompanying vegetables are usually proven to be worthy allies.

Thus, in this recipe asparagus became the rails that lifted the crispy puff pastry to protect it from getting wet and spoiled from the sauce. If you choose the recipe proposed for festive menus and buffets, too, have this element in mind.

All photos with the fish in the dish (it rhymes!) and in the oven belong to Dimitris Papazimouris, ex Greekadman and current Cucina di Caruso from that time that we ate the salmon wellington with the company of Eleni Psihouli. The rest of the photos were taken during its preparation for a 15 person buffet, hence bigger and differently decorated. The following directions cover the stages for both executions. 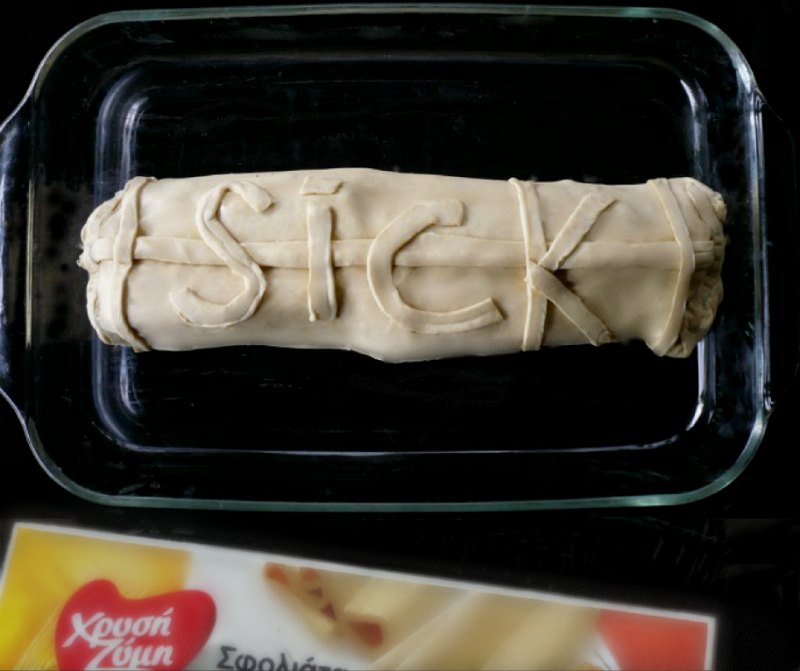 Preparation: 40-50 minutes and 40 minutes extra for the baking. You can prepare the salmon in a puff pastry from the previous day and keep it in the fridge (in the cooking pot) covered with film- it is advised. Take it out of the fridge 1 hour before the baking in order to reach room temperature. Make the sauce, the asparagus and the fried celery while the Wellington salmon is baking. Complex recipe with some difficulty due to the assembling, but only if you decide to give your salmon a special shape. Follow the detailed steps composition and you won’t have any problems. 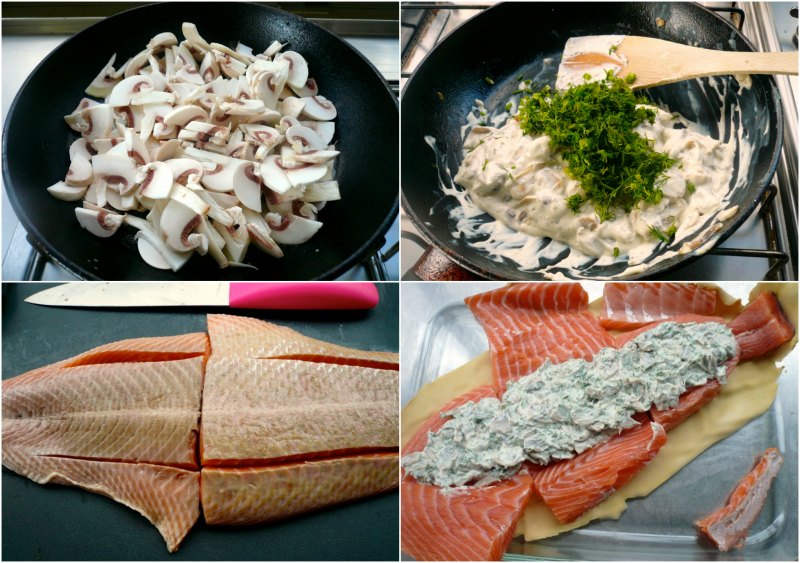 To prepare the filling: In a pan and medium fire, heat the butter and add the bacon. Saute for 3-4 minutes until it has become crispy and lightly brown. Increase the heat a bit and put the mushrooms. Saute while stirring continuously for 2-3 minutes, to soften. Add cream cheese, milk and dill, salt and pepper. Lower the fire and stir until fully incorporated. Try and adjust seasoning, if needed. Remove from heat and leave it to cool.
Preheat the oven at 200 C.

To prepare the salmon wellington: Remove the skin from the salmon, by cutting along with a sharp knife, and pulling the skin on the opposite side. Lay the 2 fillets in a cutting board with the skin side down and place them in such way to join. Cut along the length to hold the two, as elongated as possible, pieces in the centre. Add salt and pepper in both sides.

In a pan that fits the fish in its total length, spread a sheet of puff pastry and place the two oblong pieces of salmon in the middle, touching one another.

Spread the filling evenly on them and cover with the pieces of the fish that you have cut, placing the thicker pieces upside down (that means on the thinner lower pieces, the thicker sides). That way, when it comes to serving, all pieces will have almost the same quantity of fish and filling. 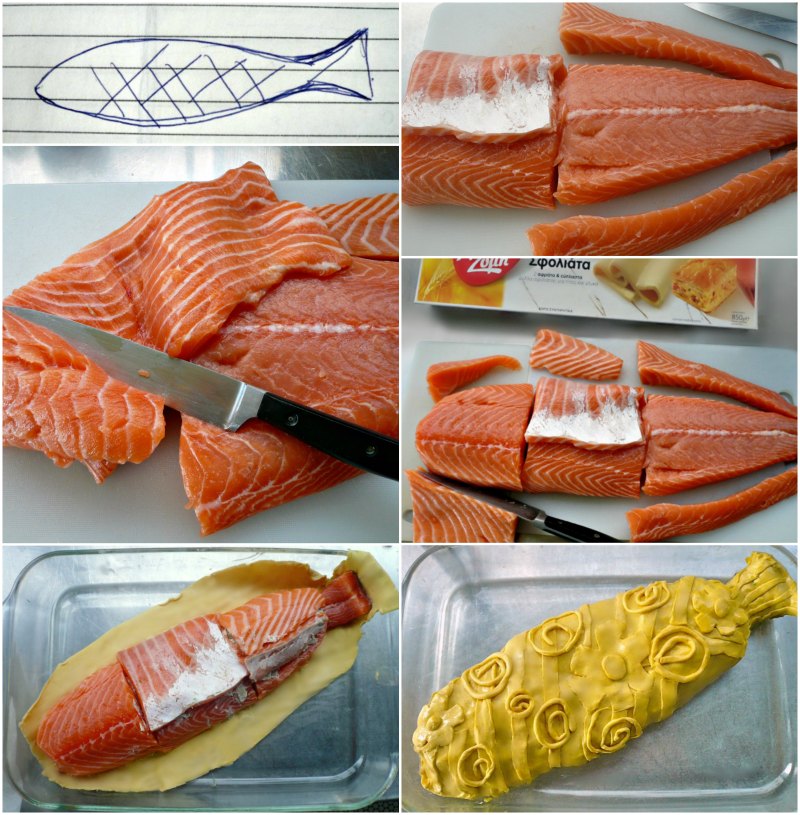 If you want to give the shape of a fish: Almost the same weight will be needed, in 3 salmon fillets (depending on the final size), which will be placed the one next to the other. Draw a rough fish pattern and according to this remove the side pieces in order to give the familiar basic shape.

Cut the outer side of the fish head round and use a small trapeze piece for the tail. You can also cut a thick salmon fillet horizontally to 2 (it’s easy with a sharp knife). Put the filling and cover with the pieces you have cut (see photo) making sure to cover the whole surface. Don’t worry if the outcome resembles a big mosaic at this stage or if you have some imperfections. They won’t be visible in the final result.

Lay the other puff pastry sheet and cut along with the fish, leaving a margin of 2-3cm around it. Spread the edges of the puff pastry with a bit of egg wash and close, sealing the content. With the remaining puff pastry pieces, create lines and shapes on top of the puff pastry, using the egg to glue them. Note: If you choose a simple, minimalistic shape to present the salmon in pastry puff, one sheet of dough may be enough. In that case, lay the pastry puff in the pan in such way, that the part that will turn to cover the fish, is left out. Spread the beaten egg in the puff pastry surface and bake in the preheated oven for 35-40 minutes. The puff pastry should then have a nice golden- brown colour and be crispy.

Note 2: The baking should be scheduled to begin 40-60 minutes before the time you want to serve. Wellington can only “wait” up to 20-30 minutes, as the puff pastry absorbs the fluids and softens. 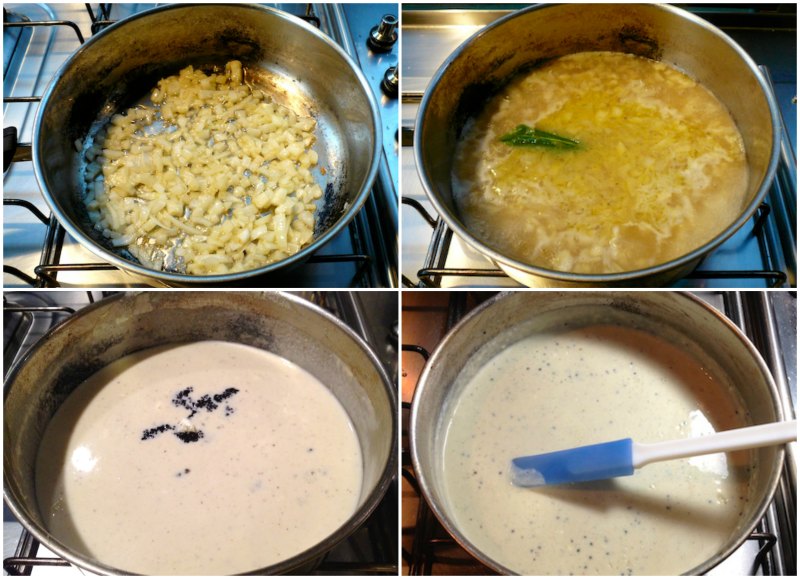 To prepare the sauce: In a saucepan and medium fire, heat the olive oil and add the onion. Saute for 2 minutes until it has dried but without having its colour changed. Add the broth, the bay leaf, salt and pepper. Bring to boil, lower the heat and simmer for 10 minutes. Add the mascarpone and the herring eggs and stir until they are unified. Pour 2-3 lemon drops, taste and correct in salt and pepper if necessary. Remove from heat and keep the sauce warm. In a large pan (if you don’t have, cook them in two phases) pour water up to 1 cm and salt and let them boil slowly horizontally. Throw away the water, add the butter and cook turning them carefully for 2-3 minutes. Transfer to a plate and keep them warm.

In the same pan and medium fire heat the olive oil and add the celery leaves. Fry for 10-15 seconds until they have started to change colour and become crispy. Remove and place them at an absorbing paper napkin. 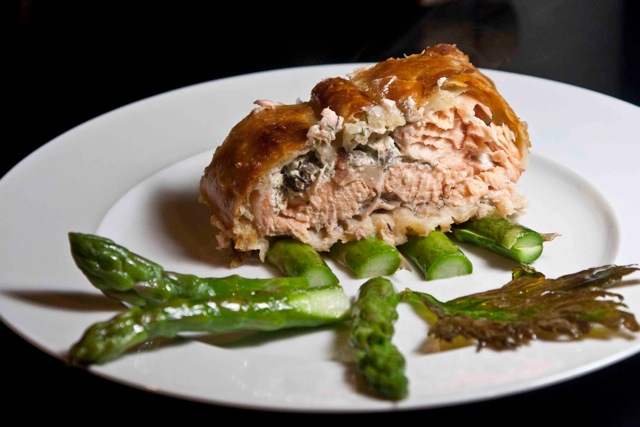 To serve: It is beautiful to present the salmon Wellington – like any Wellington – as a whole, in the table and collect some “bravos” since it can be quite impressive. Cut it in relatively large slices (3-4 cm), to avoid breaking the puff pastry. Put each slice on 3-4 asparagus, with their flat side facing the dish, cut diagonally somewhere in the middle, so they protrude from the puff pastry and look like rails. Leave the asparagus tips on one side of the dish and add 1-2 fried celery leaves, forming a paper hand fan. Pour a tablespoon of sauce over the asparagus and serve the rest separately. 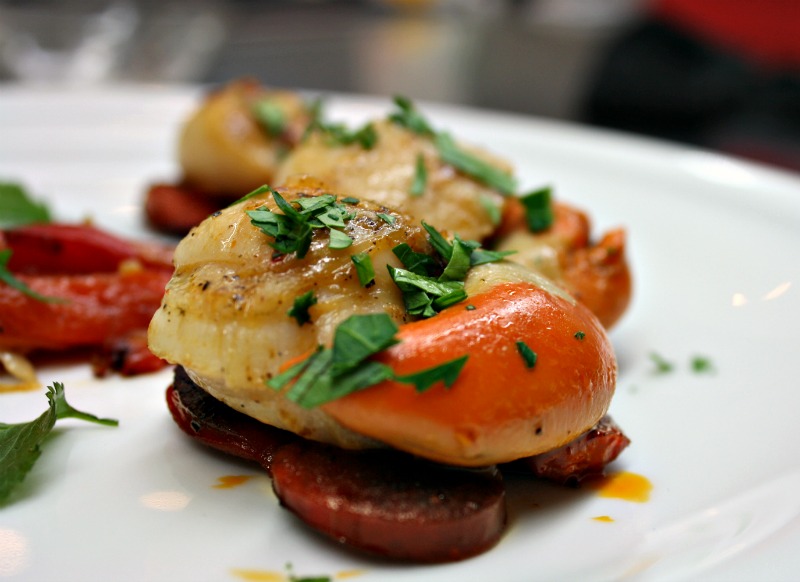 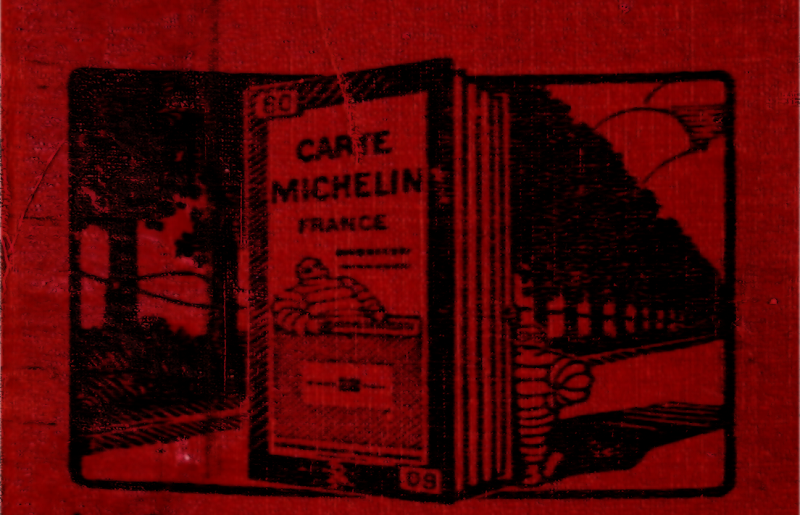