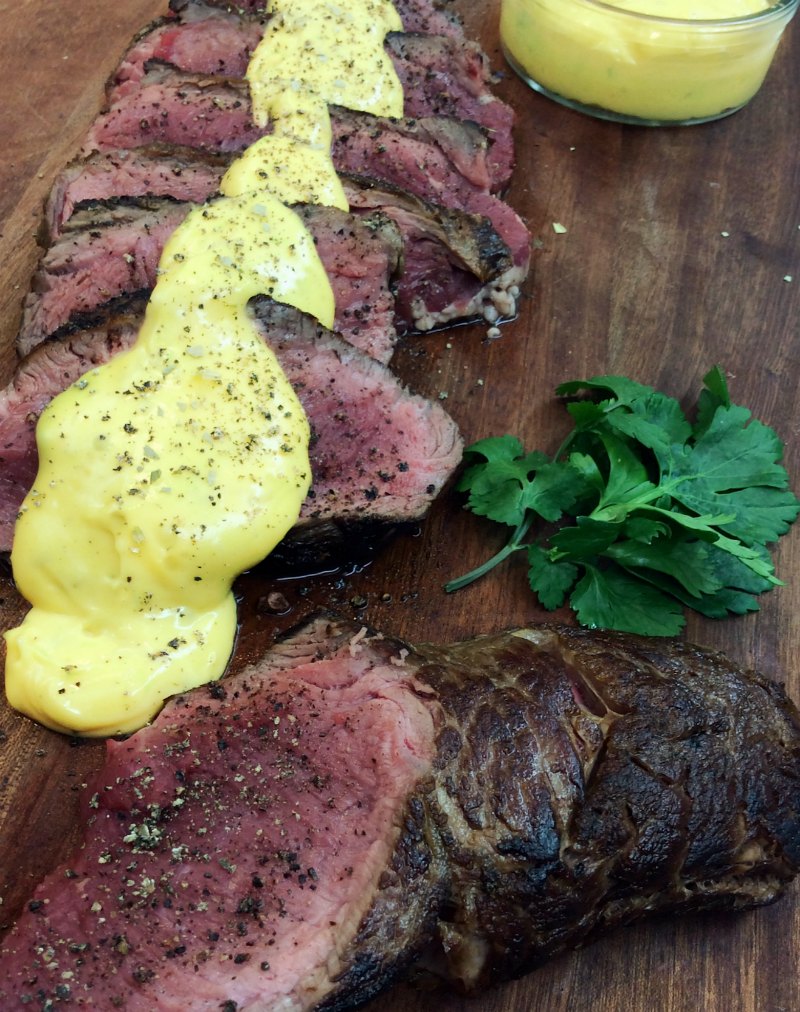 An old foible to the classic French pairing of “fillet or sirloin with Béarnaise sauce and fries” has been an extra reason for developing a special communication in various restaurants for many years.

A meat with fries dish was always standard in the menu, although it was quite rare to receive the rare meat you’ve asked for since most of the time it was medium cooked. However, things were getting really difficult when you posed a simple question like “may I have some Béarnaise sauce please?”. The waiter was coming and going endlessly inside the kitchen and back, talking with the chef while your meat was getting colder and the fries were almost eaten.

And by the second glass of wine, if you were lucky you would get a watery butter sauce with samples of estragon or the answer “we’re sorry we do not have this sauce”. Either way, it was a bad turnout especially when you were paying 35-40 euros per dish in restaurants famous for their service and cuisine. 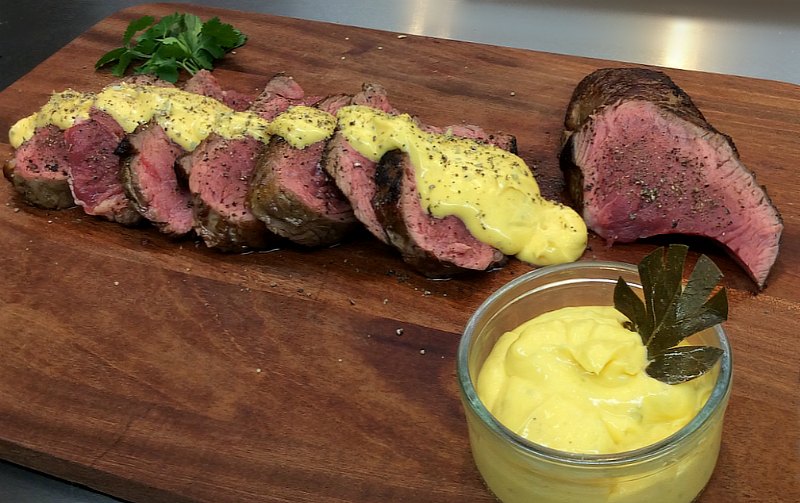 The creamy and yellowish Béarnaise is a rich buttery sauce, primarily flavoured with estragon (and some added chervils) and is one of the top five basic sauces of the French cuisine. Inspired by Collinet, it was first served in the “Le Pavillon Henri IV”, a hotel -restaurant situated in Saint-Germain-en-Laye, near Paris. It is made of egg yolks, evaporated by ⅔ vinegar and the addition of butter (melt or in cubes), that’s why it creates an acidulent taste that matches the roast meat and fish ideally.

Τhe preparation of the sauce varies both in proportions and the way the ingredients are used, because of the tendency to simplify things for the easier implementation in a domestic (and non) kitchen.
There are two points in the classic recipe, for which you should be extra careful: a.) the temperature when you prepare the sauce (it shouldn’t be too hot because it will spoil/curdle the sauce) and b.) the gradual addition of butter.
According to the culinary protocol, Béarnaise should be served warm, but we suggest that you don’t stress too much about it, as even when in room temperature, the sauces remains just wonderful. 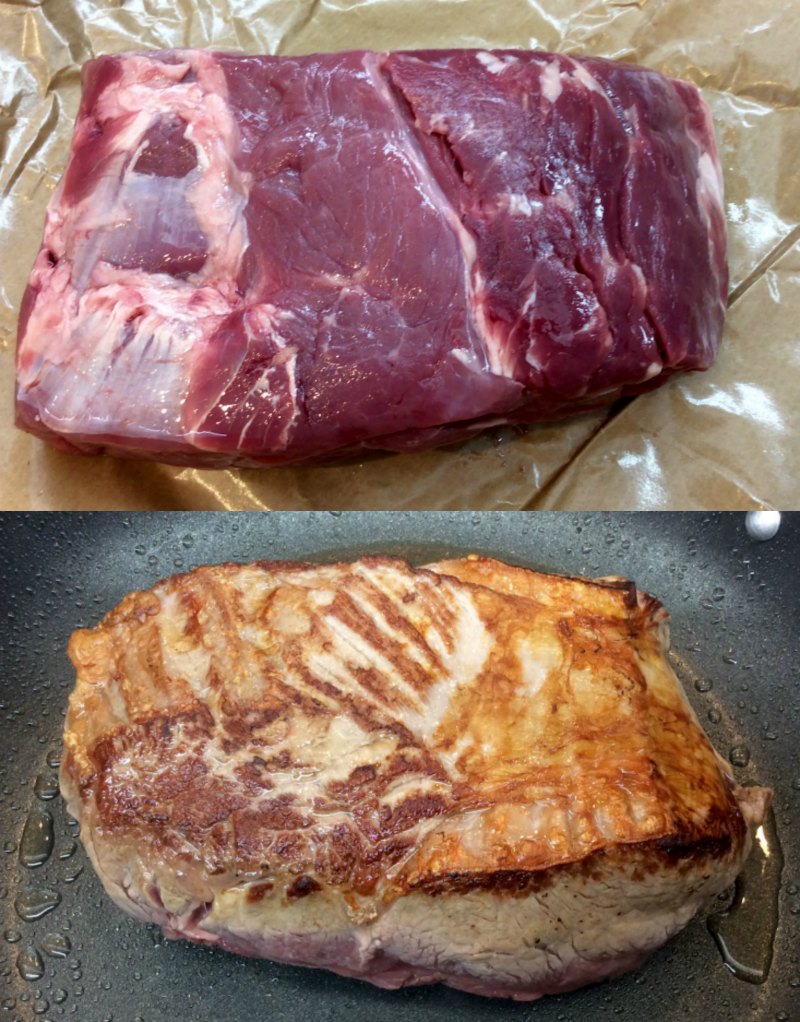 The recipe is extremely simple and the outcome exceeds the expectations. Α whole, delicious piece of beef sirloin was rare cooked in the pan-grill, cut in slices and served with Béarnaise sauce and pepper. The juicy, tasty meat found its pair in the aromatic sauce and created a combination intense enough that did not stop them from having their own place in the mouth and palate. Ideal!

The same can be done with a fillet or filet mignon (requires less cooking time) or t-bone or rib-eye steak. Here, I remind you the preferable temperatures for right cooking of your meat:

You can find out more about the cooking temperatures here and preferably use a thermometer for more accuracy. 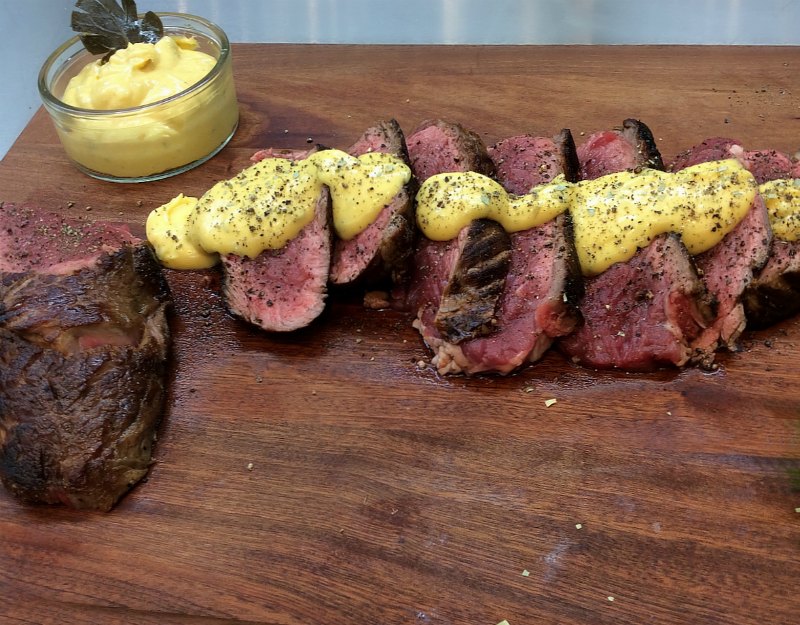 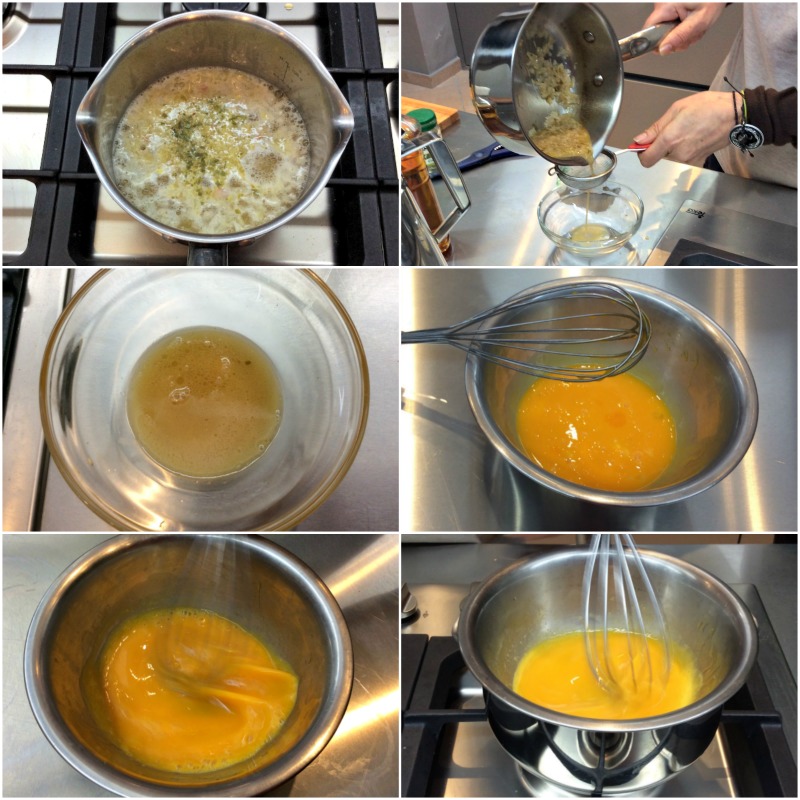 To prepare the Béarnaise sauce: Use a saucepan that can take a bowl for bain-marie. Fill it with water approximately 1.5-2 cm height (the bottom of the bowl should not touch the water) and bring to simmering – not boiling.
In a second saucepan and medium heat, put the wine, the vinegar, the onions, salt and pepper and half of the herbs. Bring them to boil, lower the temperature and boil in low heat (for 8-10 minutes) until most of the liquid has evaporated and only 2-3 tbsps have been left.

Remove from fire and pass through a strainer into the bain-marie bowl pressing the solid ingredients with a spoon to extract their juice. Allow to cool for a while. 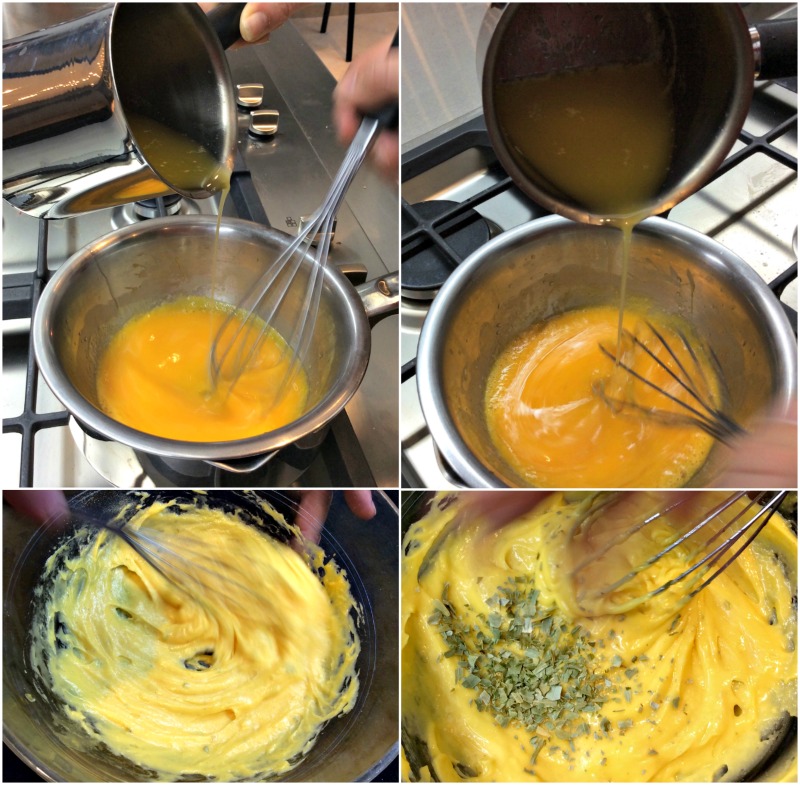 Put the yolks in the bain-marie bowl stirring constantly with the whisk until the mixture has thickened (3-4 minutes), forming lines. Check the water by carefully lifting the hot bowl with a towel. It should not be boiling so the sauce doesn’t spoil.
Pour the clarified or melted butter slowly in a thin stream, while stirring until the whole quantity has been fully integrated (2-3 minutes). Add the remaining herbs.
Try and adjust salt and pepper, if needed. If it has become too thick, add just a little bit of water. Keep the sauce warm in the bain-marie fire or by placing it on a warm towel. 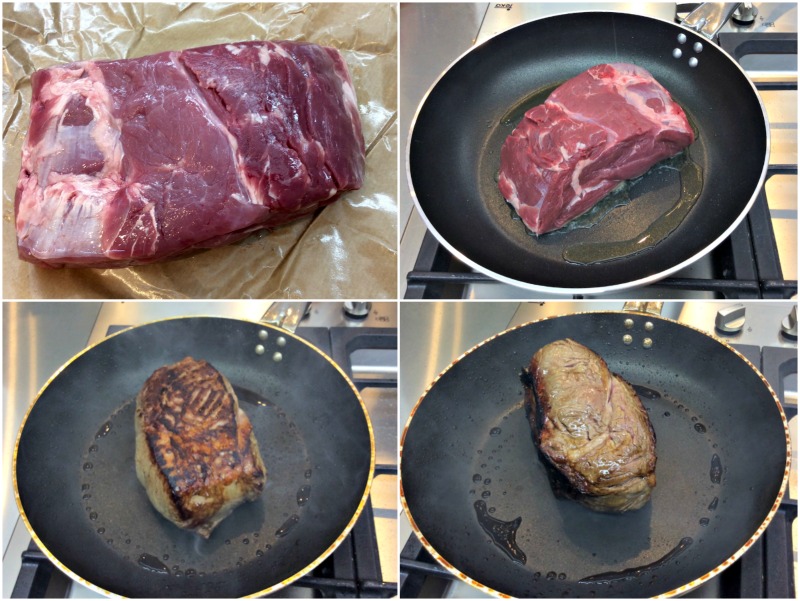 Preheat the oven at 170-180C (optionally, if you choose to finish the cooking in the oven)
To cook the sirloin: In a pan or a grill, heat well the olive oil (almost smoking) and put the meat. Turn upside down every 1.5 minutes, so the overall cooking will be 4.5 – 5.5 minutes per side for rare (internal temperature 45-48 C). If you aim for a Medium result, cook 7-8 minutes per side (internal temperature 53-56 C). Lower the temperature to medium after. If your grill is striped, turn each side by 45 degrees when charred. Cook the lateral sides for an extra minute each.

Note: The time varies depending on the thickness of the meat. The one in the photograph is 7-8cm thick and we aimed for completely rare. It was cooked for 4.5’/side and less than a minute for every perimeter. If your fillet is half the height, the cooking time should be almost 2-2.5’/side for rare and 3-3.5’/side for medium.

To finish in the oven (optional): Place your fillet in the preheat oven and leave it for 10 minutes. 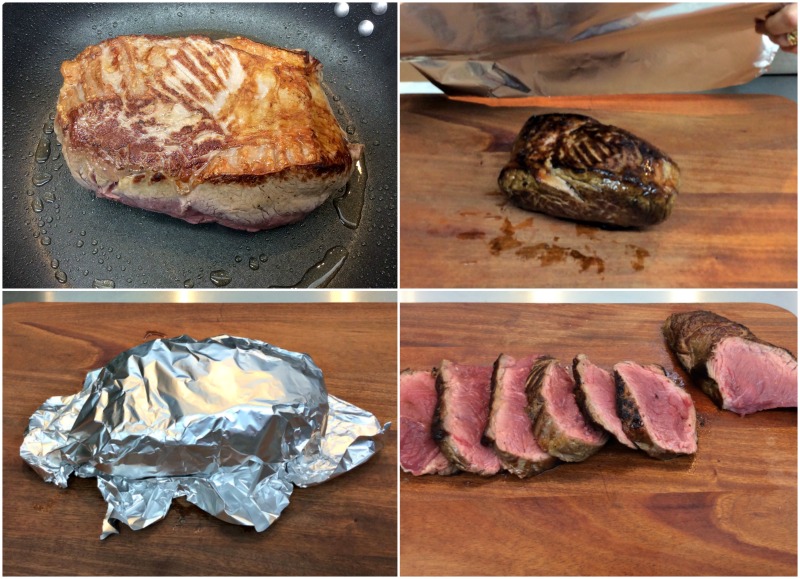 To serve: Transfer the meat on a cutting board/surface, cover with foil and leave it “to rest” for 8-10 minutes (during that time, it continues to cook). Slice vertically towards the fibres/across the grain (or/and slightly diagonally) and serve in warm dishes, adding the sauce on top or/on the side.

For the sirloin with Béarnaise sauce, the classic French combination requires golden, crispy, medium cut fries.
Extra tip: If you want your fillet to have an extra shine, spread a little butter, like the French do. 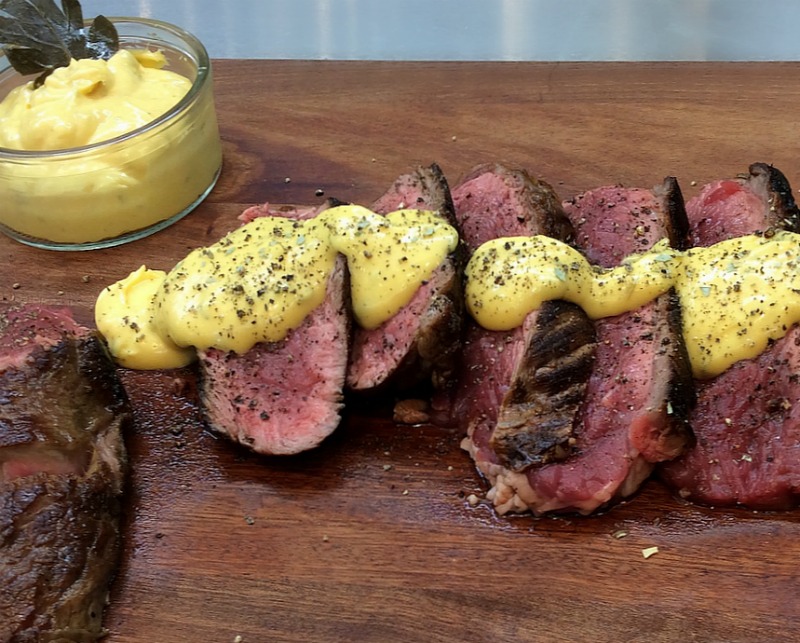