The meringue is a sweet contradiction that highlights a sweet like this strawberry pavlova. On the one hand, you would expect a recipe consisting of only 2 basic ingredients to result in a rather boring, uniform dessert. Nothing could be further from the truth – homemade meringues are cool, smooth and glossy on the outside and soft, marshmallowy with a hint of toffee on the inside… And that’s the secret. Homemade meringues are far superior to even the best shop-bought examples which tend to be rather dry and lacking structure and that essential wow factor…

The other contradiction is that while the recipe is superficially extremely easy – only two ingredients, two preparation steps and then it is left to cook by itself – it does require careful handling and vigilance in order to reward you with perfect results! First of all, the obligatory quick history lesson. The widely-held theory that meringue was invented in the Swiss town of Meiringen by an Italian chef named Gasparini is arguable. It is more likely that the name meringue first appeared in print in François Massialot’s cookery book of 1692. The word ‘meringue’ first appeared in English in 1706, in an English translation of Massialot’s book.

Two much earlier seventeenth-century English books of recipes give instructions for sweets that are recognizable as meringue, but are called “white biskit bread” in the book of recipes started in 1604 by Lady Elinor Fettiplace (c. 1570 – c. 1647) of Appleton in Berkshire, or called “pets” in the collected recipes written by Lady Rachel Fane (1612/13 – 1680), of Kent. Meringues are still referred to as “pets” (meaning farts in French) in the Loire region in France due to their light and fluffy texture. A very coarse nickname for such a refined confection, I think! 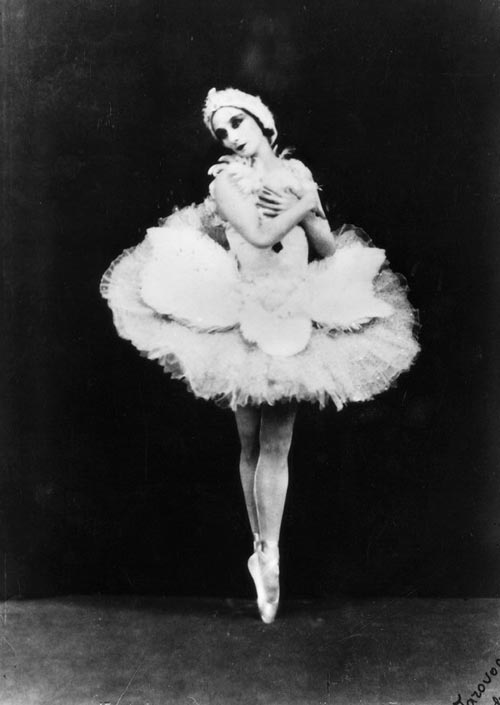 Pavlova is a dessert made up of meringue, whipped cream and fruit (traditionally strawberries). It is believed to have been created in honour of the world-famous ballerina Anna Pavlova, in honour of her tour to Australia and New Zealand in the 1920s.
Looking at her, it’s not hard to imagine why they chose white fluffy meringues as the base of a dessert made in her honour!

1. The golden rule to making meringues is to be scrupulously careful with all utensils. There must be no water or grease on any of the bowls, whisks etc or the eggs won’t whip.

2. The oven should be pre-heated to 150°C but do make sure you are not going to be using it for anything else, since the meringue stays in the oven until it is completely cold, so that it partly bakes and then slowly dries out. That’s why I would recommend making this late in the evening so that it has all night in the oven.

3. The strawberry pavlova I have made consists of two meringue bases wedged together with strawberries and whipped cream. However, you can always make it with just the one base covered with chantilly cream and fruit – simply halve the quantities below.

Preparation: Meringue bases can be made up to 10 days in advance and stored in an airtight container.
I would recommend making the mixture for each base separately, in order not to overload the mixer. So, for the two bases, have two sets of 6 eggs ready. The eggs must be very fresh as this makes them easier to separate. Easy recipe when careful in handling.

Preheat the oven at 150°C.
Preparing the meringues: Separate the 6 large eggs, one at a time, placing each white in a cup or small bowl before adding it to a bowl.

This means that if an accident occurs with, say, the third egg and you break the yolk, the others are safe. If even a tiny bit of yolk falls into the white, it will have to be discarded. Then repeat with the other 6 eggs and place them in a separate bowl.
The proportion of sugar is always 50 g for each egg white. Weigh out 2 x 325g sugar into two bowls and have a clean, grease-free tablespoon ready. 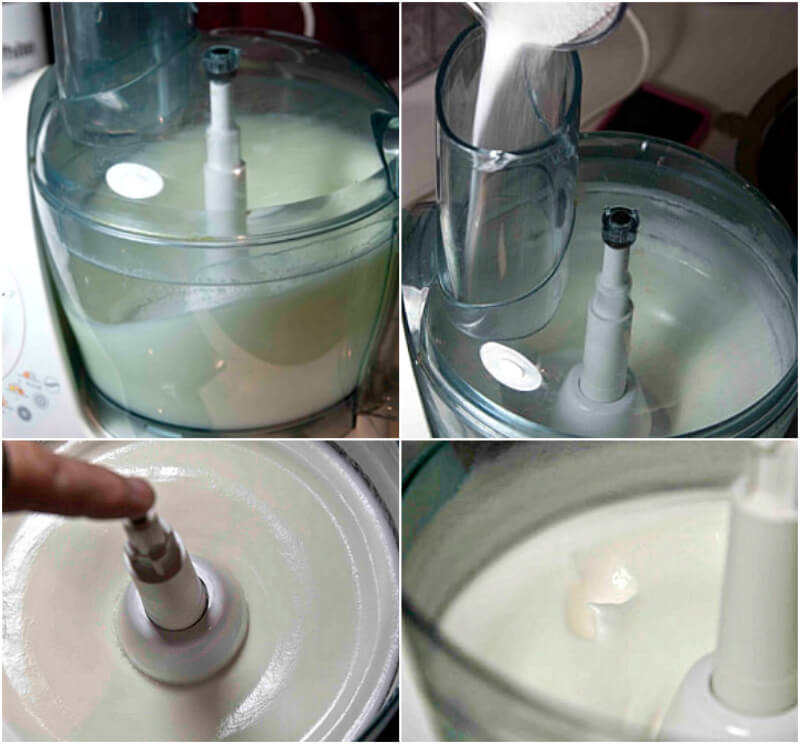 Place the first 6 egg whites in the mixer bowl and have one of the sugar bowls ready. Now whisk the egg whites until they form soft peaks and you can turn the bowl upside down without them sliding out. (It’s very important, though, not to over-whisk the egg whites because, if you do, they will start to collapse).
Next, whisk in the 325 g of sugar on a fast speed, about 2 tablespoons at a time, until you have a stiff and glossy mixture with a satin sheen. (At this point you can gently fold one handful of chopped almonds into the mixture). Spoon onto a baking sheet lined with silicone paper (baking parchment) ready for baking.
Now repeat with the second set of egg whites and sugar for the second base. 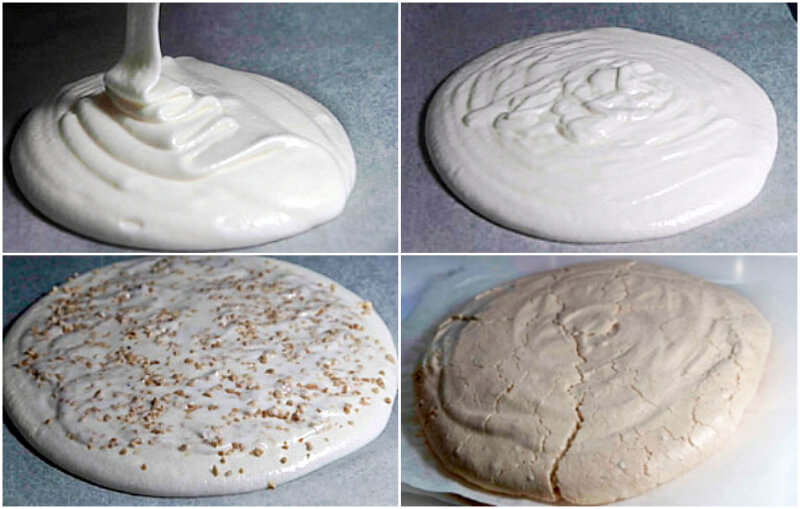 Baking: The pavlova bases go into the oven at 150°C, the temperature is then immediately reduced to 140°C and, after baking for 1 ½ hours, the oven is turned off and the bases are left in there, undisturbed, until the oven is completely cold. 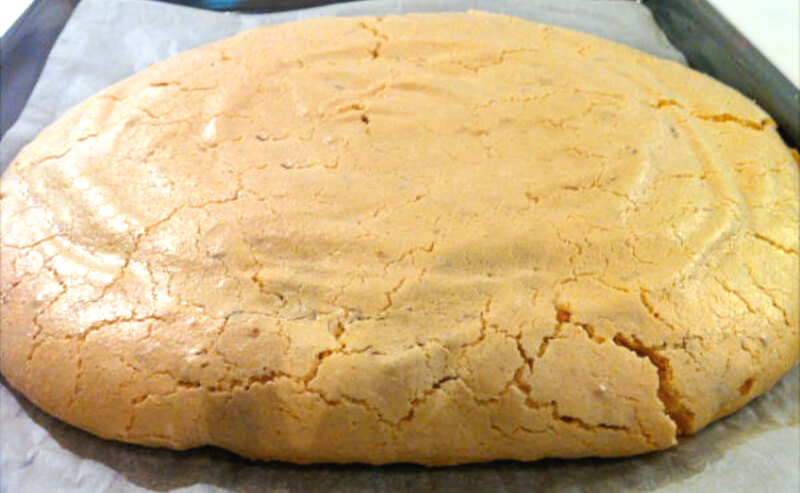 Making the Pavlova: When cooled, peel the silicone paper off carefully and place the first meringue base onto a flat plate.

Serving: Bring the strawberry pavlova on the table. Sit back and await the compliments to the chef! 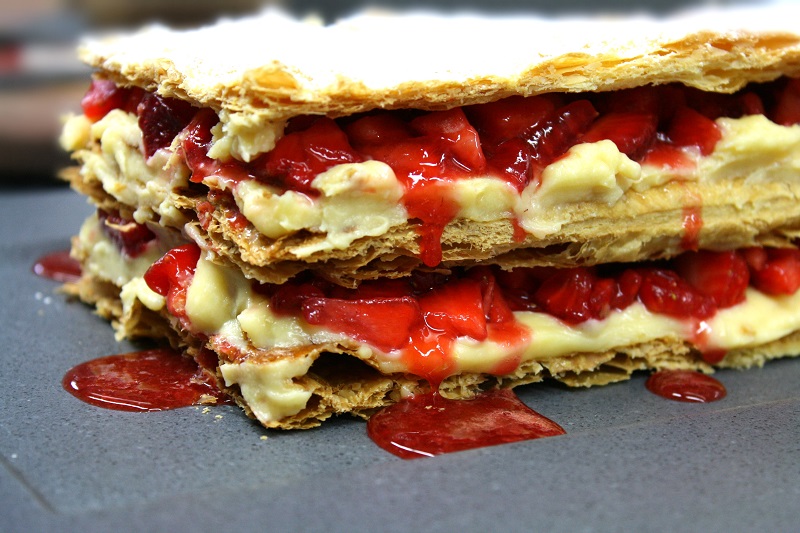