Youvarlakia: a study on a Greek dish 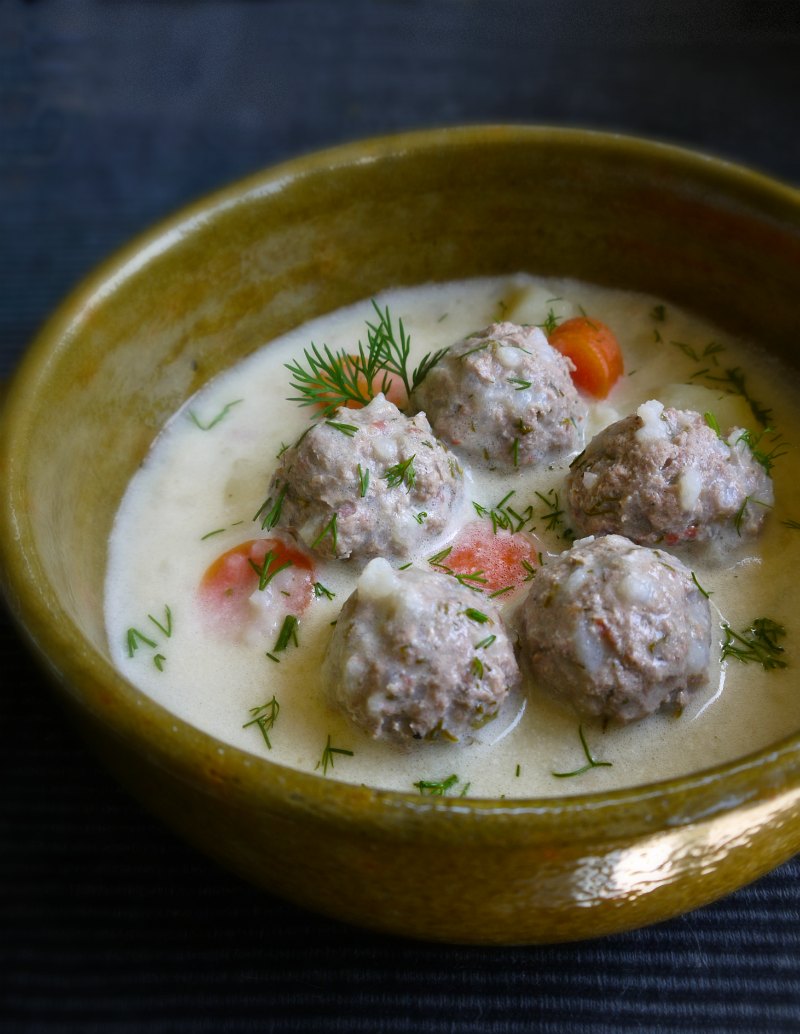 The first lecturer on youvarlakia (traditional Greek meatball soup) in our home was Mrs. Grammatiki, a heroic figure (since she withstood my cooking tricks and the psychological burden of other people). I refer her in other posts (soutzoukakia, pumpkin pie with nutmeg, etc.) and I will eventually refer her again. However, the tasty youvarlakia of Mrs. Grammatiki were not glorified by history. To explain more precisely, Mrs. Grammatiki’s dish lost the chance to be recorded in my gustatory memory because of Christine’s youvarlakia (Christine was our English nanny and maniac bicyclist, back then when the age limit for riding bikes was puberty). Christine made Greek dishes from an English cookbook that had no illustrations, her cooking bible quite unknown. Years later she asked me to give her a cookbook by Tselementes* and I gave her one in two volumes, quite old but relatively intact, without oil stains, but with illustrations. We never, however, tasted youvarlakia à la Tselemente, thank God, because his version with tomato sauce and artichokes is one of his most devastating creations.

Christine, although vegan, had conquered the Greekness of the recipe, and her youvarlakia exceeded those of any chef, with her delicious egg and lemon sauce, which was truly thick, like porridge. Until recently you could hear kids beg for us to prepare Christine’s youvarlakia for them.

The best youvarlakia, though, with a noticeable difference from Christine’s, is Helen’s. I have already mentioned her recipes and will refer to them again in the future. For more than 10 years, because of her, we used to take regular breaks from our multinational culinary adventures and enjoy Greek recipes. She spoiled us and raised the horizontal bar of our culinary expectations.
Here is her recipe, a true study in youvarlakia, undoubtedly a bonus for all of us at Pandespani. Last time I cooked them for lunch with one kilo of minced meat and 5 of them barely survived to be photographed in the afternoon light. 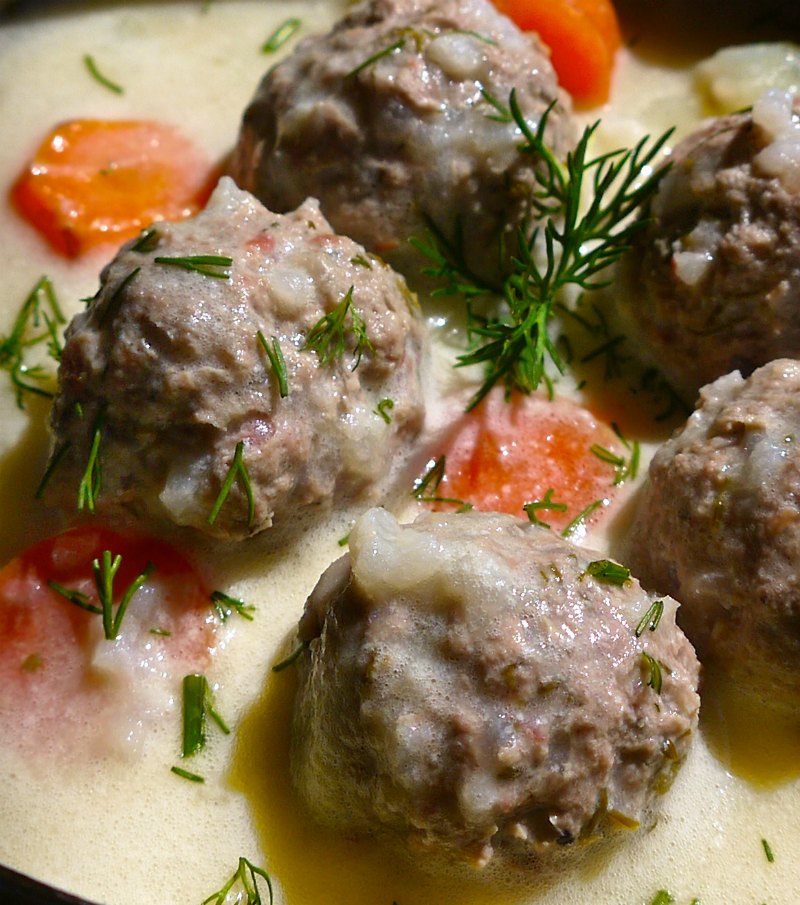 Youvarlakia has a double essence. Is the dish a soup or not? Grandiose indecision, as if they have sworn not to be classified as one extreme (soup) or the other (not soup). They are white, with a velvety egg and lemon sauce (avgolemono sauce), elegant in size (not like boulders), with a small quantity of rice (the minimum required) added just to loosen the meat ―never overwhelming it.

These youvarlakia have an airy texture as you bite into them, resulting from the combined ingredients ―not from the one-dimensional intervention of rice. The flavouring herb is dill (though fennel could be used alternatively, with parsley added last). Of course, the vegetables (carrots and potatoes) give an extra touch to the taste and sight of the dish, while in accord with the standards of the recipe.

This version of the egg and lemon sauce is an easy one and less stressful for those who fear failure. You can find the classic avgolemono sauce in the recipe “Stuffed Zucchini with Minced Meat.” The present version does not use cornflour to thicken the sauce. This is the job of the rice in the stock, which, while it boils, affects thickness of the liquid. This trick allows the dish to maintain its nature and in the end, to be lighter. The minced meat (beef, or half beef and half pork) contains tomato, which adds a hint of flavour but does not alter the colour of the dish. Finally, youvarlakia need a min quantity of olive oil –but in no case butter or margarine or similar ingredients.

As with several Greek dishes, youvarlakia are often abused during preparation and presented like malformed thick balls, with a flat flavour and completely indifferent in every respect, but if cooked properly, they are small culinary miracles with well-balanced texture and flavor, rather light, free from seasonal restraints and equally delightful to the eye and the palate. 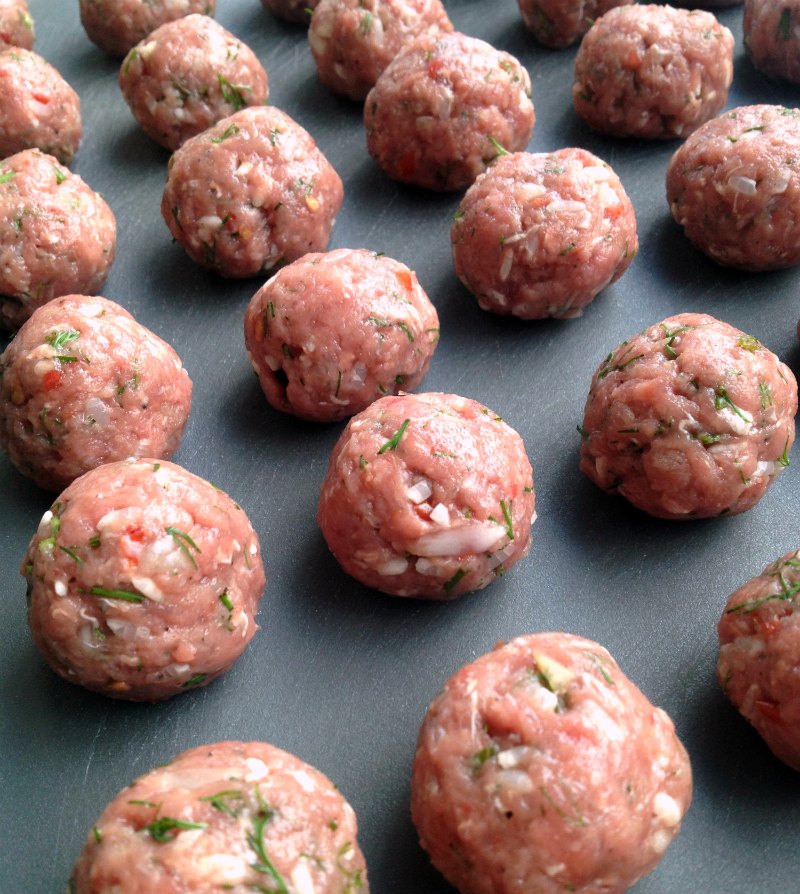 * Nikolaos Tselementes was a Greek chef, whose cooking was strongly influenced by French cuisine, and the first who wrote a complete cookery book in Greek.

Preparation: 30-40 minutes plus another 45 minutes for cooking. To peel off easily the tomato, drop it into boiling water for half a minute. You can prepare the dish without the egg and lemon sauce (avgolemono) the day before and keep it in the fridge (allow to cool first). The next day, let the food reach room temperature, then warm it up slowly before serving and add the avgolemono sauce. Medium difficulty recipe.

for the egg and lemon sauce (avgolemono)
1 egg, separated
1 lemon, juice only 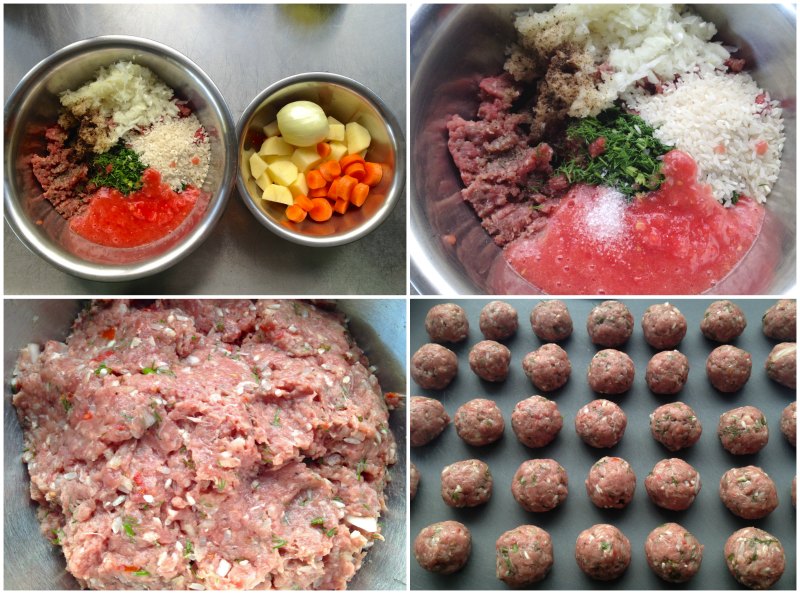 To prepare the base soup: In a large saucepan, where there would be enough space for both meatballs and liquid, add the water or stock and all the soup ingredients, except salt, and bring to a boil. When it starts to boil add the salt and cook for 20 minutes. Taste and correct seasoning. Place carefully the youvarlakia in the saucepan and bring back to a boil, lower the heat to medium and cook for 20-25 minutes. Remove from the heat and add the lemon juice gradually, while tasting it. Ladle around 400 ml from the broth into a separate bowl and let it cool (if you are in a hurry, add 2-3 ice cubes, not more). 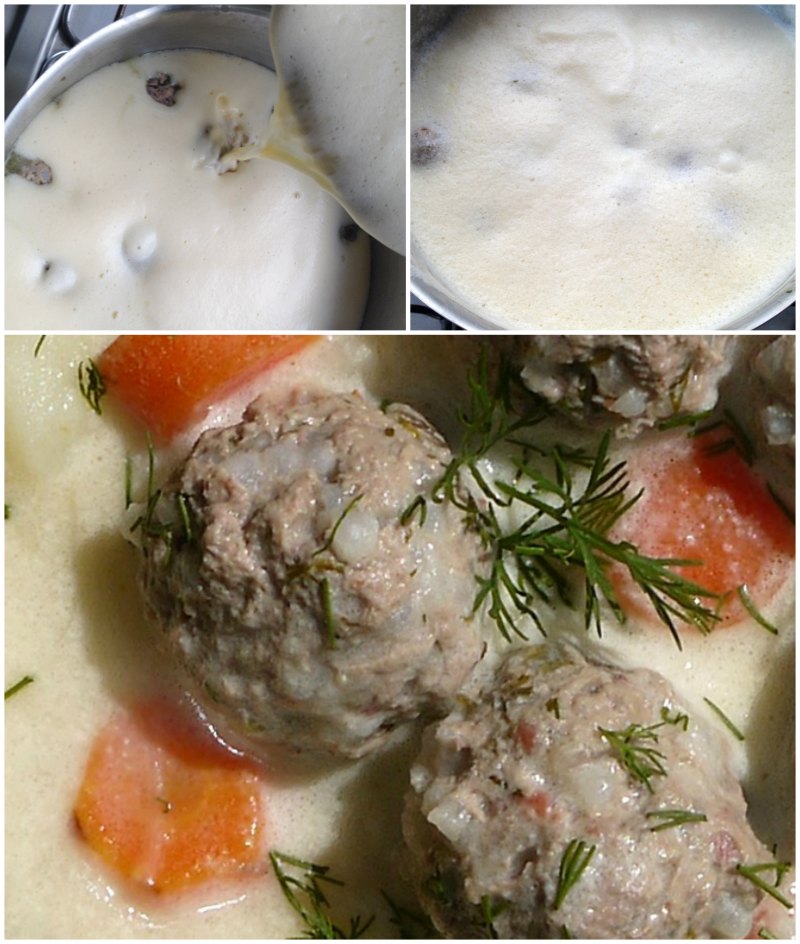 To make the avgolemono sauce: Beat the egg white until stiff peaks form, add the egg yolk and whisk to mix thoroughly. Pour slowly the egg in the bowl, stirring continuously, and then add the mixture gradually back into the saucepan, shaking it in a circular motion to combine well. Ready.

To serve: Serve youvarlakia in soup plates or bowls (warm them in winter), and sprinkle with finely chopped dill. cypriot meatballs with potato and fame